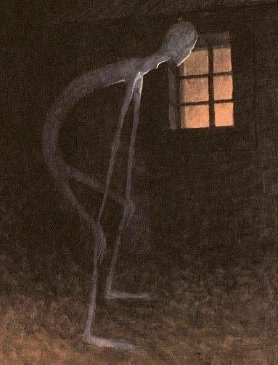 Hundreds of people around the world have reported encounters with what look like giant 3D stick figures in real life. Are these people seeing a new cryptid or are these modern sightings of the Slavic night spirit Zherdyay?

In the last few years hundreds of sightings have been reported online of a large stickman like cryptid stalking people in the dark. The black stickman is described as being very long, tall and thin and pitch black in colour.

Sometimes it is the same height as a human while other times it is said to be up to 12 feet tall. Reports have said that the figures look the same from all angles and appear to be two dimensional.

Some people claim they are more likely to encounter one of these figures during wet of stormy weather. They are also more likely to appear at night time. The black stick man does not seem to be tied to any one location but will appear anywhere, out of the blue.

While some encounters with these beings have been verified as hoaxes there are still hundreds of stories online that can’t all be debunked.

The black stickman sounds very similar to the Žjerdjaj or Zherdyay from Slavic mythology. Žjerdjaj directly translates as Longshanks. The Zherdyay is a very long and lanky figure that is described as having limbs like tree branches and being so tall he can warm his hands at the top of a chimney.

Zherdyay is believed to wander aimlessly through the streets and sometimes bend down to look in the windows of houses. Zherdyay is said to be jealous of people living their lives and having things to do so sometimes he pulls pranks on them.

Zherdyay is said to be so terrifying to look at that people faint at the sight of him. He is only able to be able to get in houses if the gates to the north are not properly closed.

If Zherdyay is hanging around he can be gotten rid of with prayer and fasting and by taking the candle from Friday mass and blowing the smoke over a cross hanging in the doorway of the house. The gate to the north needs to be left open so that he can leave and then closed again so he can’t return.

Hundreds of people on reddit claim to have seen these creatures in real life. You can read some of their stories here.

Cryptozoologist Marc Wolfgang Miller spotted six black stickmen in Buford, Wyoming. He tried to take a photo of a 12 foot tall stick man, but the creature blended in with the trees in the photograph.

Skeptics believe that all sightings of the black stickman are a hoax or just shadows that are being misinterpreted by the viewer.

Some believe that the black stickman is a two dimensional being. When it turns to the side it simply disappears from view because it has no depth. This could explain how it is able to appear and disappear so quickly and move across surfaces.

If you enjoyed this article you may also be interested in shadow people or some other lesser known cryptids.

Affiliate links. We may earn a commission.