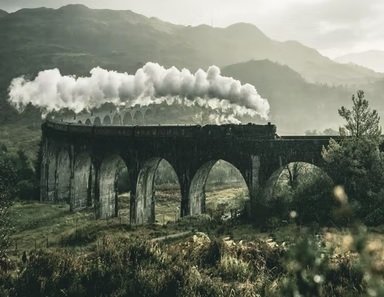 In the 1880’s a bigfoot was reportedly hit and killed by a train with its body being carried off by Native Americans. Could there be any truth to this story?

A women named Rita Smith was interviewed by Scott White from the International Bigfoot Society. She recounted this story told to her by her grandfather, George Huhn, who lived from 1845 – 1947.

George was an engineer working on a train that ran along the border of the US and Canada in the 1880’s. One night while he was working on the train, travelling through a forest in the middle of nowhere, it suddenly hit something. The train had to be stopped because the cowcatcher was bent out of shape and was dragging on the tracks.

At first they assumed it was a particularly large moose as they were common in the area. The men took their lanterns and went outside to investigate. They were shocked to find a huge ape-like creature caught up in the cowcatcher. It had a horrific, putrid smell about it.

George described the Ape to Rita as having a different face to that of a gorilla. He recalled the teeth being like that of a human but extremely wide and large. It had thick dark hair with lighter tips covering it’s whole body. The creature’s eyes were dark and much larger than a human’s. The men who found it believed it to be male because of it’s genitalia.

George estimated the creature to be about 8ft tall weighing about 500 pounds. It took six strong men to carry the creature off of the tracks. The crew who picked it up got the smell of the creature on them and had to go and wash in a nearby stream. This didn’t quite get rid of the stench and the flat car stank for the rest of the journey.

It took the men 2 hours to bend the cowcatcher back into shape. While they were working the men noticed some Native Americans sneaking about in the forest, watching them. They didn’t think much of it and continued getting the train back in working order. The men finished repairing the train and decided to check on their poor victim before leaving only to find the body had disappeared. There were heavy tracks leading in to the forest so they assumed the Native Americans must have claimed the body.

Rita fully believes her grandfather’s story as he was a devout Methodist and would never tell stories that were not true. He was a tough frontier man who fought off outlaws with his six shooter from the cab of his train.

Why not grace your yard with this awesome bigfoot garden decoration. This an affiliate link and I may earn commission if you buy it. He’s cool though I want to buy him.

This wasn’t the only bigfoot story to come out of this area in the 1880s. in 1886 several New England newspapers reported of a deadly encounter with what could be a bigfoot in the woods of Maine.

In October 1886 a frightened Frenchman returned to Elm City from the woods near Moosehead Lake. He and two friends were camping in the forest. Two of the men left for a week to hunt and when they returned to camp they found their friend had been brutally murdered. They formed a posse and roamed the woods looking for the killer. What they found was not human but bigfoot, a 10ft tall beast with a seven foot arm span. It was covered with long brown hair. The men shot the beast dead and left its body in the woods.

Ever since frontier times many people have reported seeing creatures of a similar description. Maybe its only a matter of time before a bigfoot is finally captured.

If you enjoyed this article you may also like to learn about a boy being rescued by a bigfoot or the town that was abandoned due to recurrent bigfoot attacks.