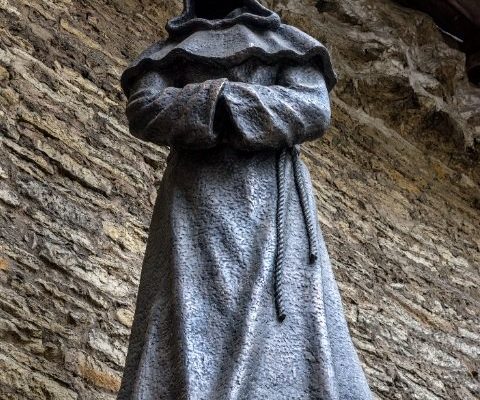 In the sleepy town of Pontefract the Pritchard family led a fairly normal life. That was until around 1960 when strange occurrences began happening around their house. Objects were thrown around the house by unseen forces, unexplained puddles of water appeared on the floor and one member of the family was even violently dragged up the stairs by an unseen entity. What could be behind these frightening events?

The encounters with the Black Monk began with puddles appearing on the kitchen floor. Jean Pritchard, the mother, called in a plumber who could not identify the source of the water. Soon after this objects began moving by themselves. This escalated into large objects being moved with 14 year old Diane Pritchard being pinned against the wall by a heavy cabinet pushed by an unseen force. She was unharmed but severely shaken. Diane claimed to have fallen asleep in her room only to awake on the floor with her mattress on top of her. The most terrifying incident involved Diane being dragged upstairs by an unseen entity leaving marks on her throat. These events lead to Diane refusing to go back into the house.

The Black Monk also had a more light hearted side. When a family member came to the house singing Christian songs to deter evil spirits it is claimed to have possessed a pair of gloves causing them to float in mid air in a motion like it was conducting the music. The Pritchard’s conducted an experiment by placing some eggs inside a box and asking the spirit to make them appear in another room. They heard a small crash in the kitchen and wen to investigate leaving one child sitting on the box. They found an egg cracked in the middle of the floor. When they checked inside the box they found that an egg was missing.

The haunting stirred up a lot of excitement in the local area. Reputable people such as police officers, politicians and clergy visited the house and corroborated the Pritchard’s claims of paranormal activity.

What is the Black Monk?

The site of the house is steeped in history going back several hundred years. Violent battles had been known to have taken place there long ago. It has been theorised that the energy left behind by these horrific events could cause a residual haunting. As well as this area was known to have been the location of a gallows used for carrying out public executions. In the 15th century a monk was hanged on the property for the rape and murder of a young girl. Some paranormal investigators believe the poltergeist disturbing the Pritchards was the restless spirit of this monk.

One woman in a house next door to the Pritchards house was working in her kitchen one afternoon when she turned around and was shocked to see a tall, dark, hooded figure. It looked to be wearing the habit of a monk with a cowl over its head obscuring its face. She said the figure looked to be solid and disappeared from sight after a few seconds.

To this day people still report strange sightings and occurrences in and around the Pritchard’s old house.

If you liked this article you might also like to learn about the Enfield Haunting or ghosts of the London Underground.