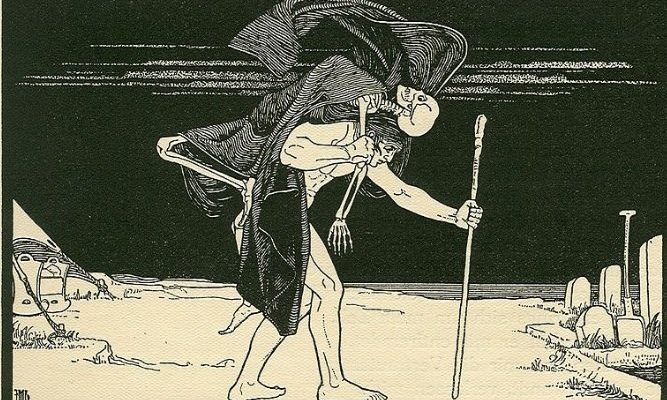 You have probably heard about demonic possession, when a demon takes over the body of a human but what about when someone is taken over by the malicious spirit of someone who is deceased? This is the what in Jewish tradition is known as a Dybbuk.

The concept of the Dybbuk was first explored 16th-century Jewish writings, though it did not gain widespread recognition until S. Ansky’s play The Dybbuk popularized the concept. In this play a woman was possessed by an evil spirit who entered her in a sexual manner. In Jewish tradition it is said that having doubt in the Torah or being a bad housewife can lead to Dybbuk possession. In some dybbuk reports, the spirit attaches itself to a human in order to complete unfinished business from it’s former life.

Since a dybbuk used to be human, sometimes a rabbi will attempt to communicate with it and ask it to leave. The dybbuk does not seem to be under any obligation to follow a rabbi’s instructions and will leave or not under its own free will. The rabbi will attempt to convince the dybbuk to leave by reading Psalm 91 and blowing a shofar (traditional Jewish horn). The rabbi will try to appease the spirit and help it achieve its goals so that it may leave the human alone.

A dybbuk invades the body in a way that changes its host. Unlike demonic possession where the demon is a separate entity that comes and goes at will a dybbuk will attempt to slowly take over the life of its host. It will attempt to become the person it was before it passed away. For example, if the dybbuk was a loner in life then its host will begin to isolate themselves from friends and family so the dybbuk can exist in familiar circumstances. The host’s personality will change to be more like that of the dybbuk.

A Jewish woman in Poland in the 18th century aid to be possessed by a dybbuk which spoke from her throat in Polish. Polish was not her first language and she was not particularly adept at speaking it on her own. The dybbuk caused her great pain when it was speaking, It would not allow her to pray or follow any Jewish rituals. Three exorcisms by prominent rabbi’s were attempted. The first rabbi gave her a special amulet to wear. The second recited several prayers. Both exorcisms were effective for a few days before the spirit returned. The third exorcism was not a typical exorcism. The possessed woman asked for the lamps to be lit and cried out that she must be great sinner to have such suffering. Suddenly a disembodied voice boomed out over the synagogue which witnesses recognized as the voice of a famous rabbi who had died some years previously. The voice said that the woman was a righteous woman who would get better and bare a son. The words of the rabbi came true.

Another dybbuk was alleged to possess Eidel, the daughter of a respected Jewish leader named Rabbi Sholom Rokach of Belz. The rabbi was heartbroken when his wife passed away and raised his favorite child Eidel as a boy, training her sacred Jewish practices that were usually reserved for men even though he had sons. When the rabbi his role taken by his son Rabbi Yehoshua as was the expected practice. Eidel also became a respected teacher and her wisdom was admired. Many of her father’s followers became her followers rather than her brothers. Eidel’s brothers claimed that she was possessed by the spirit of her father and that is how she had gained such wisdom. Eidel’s brothers attempted an exorcism and the voice of their father emanated from her calling out some of their embarrassing sins. The sons continued and managed to get the spirit of their father to leave. Following this Eidel collapsed and lost her sanity.

In more recent times the Dybbuk box has risen to fame as a physical object possessed by a dybbuk that causes bad luck to fall upon its owner. The most prominent story is that of a wine cabinet owned by Kevin Mannis who claimed that it was occupied by a dybbuk. He recanted his story in 2021 claiming that the story was entirely fictional and that he is a creative writer. In spite of this many people believe in the reality of dybbuks and while they appear less commonly in modern times there are still isolated reports of their existence.