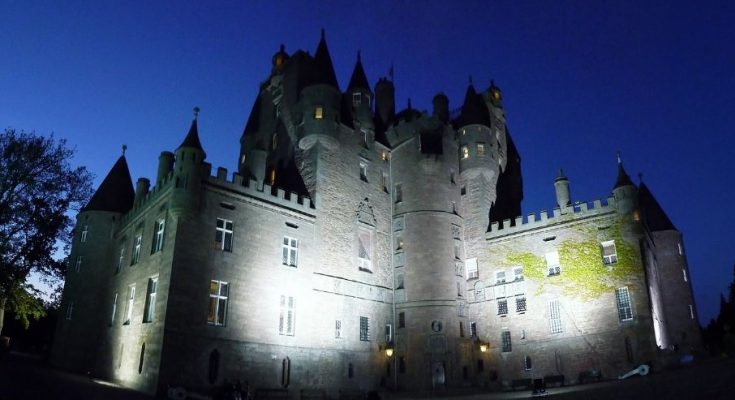 Deep in the Scottish lowlands stands a stunning 14th century castle, the ancestral seat of the Earl of Strathmore. Despite its grand architecture and beauty it is said to be home to a dark secret.

Several different types of hauntings are commonly reported at Glamis, including disembodied footsteps and the eternally sullen Gray Lady. Some of the most disturbing sightings reported are those of the tongue-less lady.

The Tongue-less Lady is often seen wandering the grounds or the halls of the house anxiously pointing at her mouth. When she opens her mouth to scream blood pours forth from it. Legend goes that Glamis Castle had a secret so horrific, yet necessary, it was only known by a handful living people at a time. The Tongue-less lady is thought to be a maid who eavesdropped on a conversation and learned of the twisted secret. She used this knowledge to try to blackmail the Earl, threatening to tell the world what she knew. Before she could, a guard cut out her tongue and left her to die.

What was this secret so horrible it was worth killing for?

It has been speculated that there are secret rooms and passages within the castle walls. Some sneaky guests tried to prove this while the family was not present by placing a towel in the window of every room in the castle. When they went to view the castle from the outside there were a number of windows that didn’t have towels. But what could be hidden in these rooms?

During the Victorian era it was frequently reported that the Bowes-Lyonses, former occupants of the castle, had born a child that was horribly deformed. This child was reported dead at birth but then kept alive in the confines of the castle, cared for by a special servant and never allowed to leave the secret rooms. Some guests even reported seeing someone at a barred up window who quickly withdrew when they realised they had been spotted. There is some precedent for this speculation as after the First World War, Katherine and Nerissa Bowes-Lyon, cousins of the present queen, were born mentally disabled and both spent their lives locked away in homes and hospitals, ignored by their family.

The 13th Earl finally put an end to any hope that the castle’s secret would ever be known for sure. It was said that he refused to participate in the initiation rite that would disclose to him the dark history of the castle and, possibly, the family. The legend and the castle’s true secret died with him.

Many visitors to the castle comment on its’s chilling atmosphere and how unsettling it begins to feel between midnight and daybreak. Some visitors report seeing a Gray lady haunting the grounds. She is believed to be the ghost of Lady Janet Douglas, wife to the 6th Earl. When her husband died unexpectedly, she was immediately accused of poisoning and witchcraft. She was tried and found guilty in 1537 and was taken to Edinburgh and burned at the stake. She is said to reside in the castle’s clocktower, watching over the grounds of her home.

The beautiful old residence, steeped in history and legend, continues to be a popular tourist attraction. Perhaps you could visit and uncover its secrets for yourself.