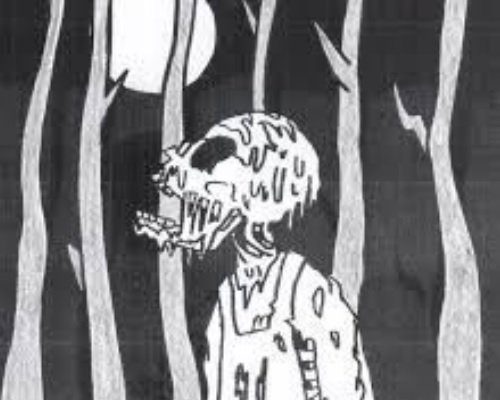 In the snowy woodlands along the Dungarvon River in New Brunswick, Canada local men would return from their exploits in the bush with stories of a mysterious whooping noise not known to belong to any animal. These experiences were connected to the legend of a young Irishman named Ryan who was cut down in his prime while working as a cook for a lumber camp in the woods. Is the spirit of poor Ryan still haunting the land to this day?

The legend goes that young Ryan was travelling about working at different lumber camps for a number of years. He had a simple bag filled with his meagre possessions and a bulging money belt around his waist. Ryan as generally well-liked despite being a bit overbearing at times. He was well known for his talent of whooping and hollering. Despite being a small man he could yell louder than any other man at the camp.

Ryan’s role as the cook meant that he had to get up much earlier than the rest of the men to prepare the breakfast and fill the lunch pails for the men to take out with them. When he had finished his morning duties he would let our a loud whoop to wake the men and call them to breakfast.

One day the owner of the lumber camp came for a visit. He was not well known to the men but they respected them as he was the one that paid their wages. The day started as usual with the men being roused for breakfast by Ryan and then leaving camp to fulfil their duties in the forest with just Ryan and the boss being left at the base. When the men returned at the end of the day they found Ryan’s lifeless body devoid of his treasured money belt. The men confronted the boss who claimed that Ryan had fallen ill not long after breakfast and slowly succumbed to his death over a number of hours. The men were suspicious and asked if this was true where was Ryan’s money belt? The boss didn’t have an answer.

Almost immediately a horrible storm began to rage at the camp. Not wanting to sleep with a dead body in the camp and wanting to give their friend a proper burial the men set out in the storm to bury Ryan in the woods. As they made their way back to the camp they were surrounded by a terrible whooping noise just like the one Ryan used to call the men to breakfast. It came from all directions and continued throughout the night terrifying everyone at the camp.

The men returned to the shallow grave several days later with a priest intending to give poor Ryan the proper funeral rites but found an empty grave with his body no where to be seen. Following this the spine-chilling whooping noise would echo throughout the camp every night.

When spring reached the forest surrounding the Dungarvon River the men parted ways joining different lumber camps throughout the country. Although the men moved on the Dungarvon Whooper did not stop his calls to them and many visitors to the area report hearing his tortured whooping and hollering to this day.

Skeptics claim the mysterious whooping noises are just the sound of wind howling through the trees or perhaps an uncommon bird species. One would however expect experienced woodsmen to be familiar with these sounds an not be frightened by them.