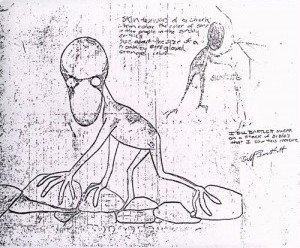 Sketch of the Dover Demon By William Bartlett

On April 21, 1977 17 year old Bill Bartlett was driving along Farm Street in Dover, Massachusetts at about 10pm when he was startled by the appearance of a strange creature on top of a broken stone wall. The figure had large glowing eyes, tendril-like fingers and walked on all fours. It had no ears, no mouth and no nose, a melon shaped head, rough skin and stood about 3 and a half feet tall. The creature was spotted again by two other teenagers later that night and the following day. Were these events just a school holiday hoax by some bored kids or something more sinister?

The Bangor Daily News reported that Police Chief Carl Sheridan was particularly concerned by Bill Bartlett’s report as he was a reliable witness and a budding artist. Bill stated that he was terrified of the creature and that he was too scared to go back to where he saw the creature in case it was still there. Decades later Bill has made a career as an artist and has his works in galleries across America. He still stands by his story of what he saw that fateful evening. ‘‘In a lot of ways it’s kind of embarrassing to me,’’ said Bartlett. ‘‘I definitely saw something. It was definitely weird. I didn’t make it up. Sometimes I wish I had.’’

John Baxter, 15, was walking home from his girlfriend’s house on Miller Hill Road around midnight that same evening when the creature suddenly appeared about 15 feet from where he was standing. He thought it was one of his neighbours who was short in stature and called out to them but there was no response. The creature appeared startled and scurried away down a slope and into a small gully. It was then that John saw it wasn’t human but a monkey-like creature with a “figure-eight shaped head”. John was so frightened by his experience that he flagged down a passing motorist and hitched a ride home.

The following night also around midnight Abby Brabham, 15, and her boyfriend Will Taintor, 18, were driving home down Springdale Avenue when she spotted the strange creature. Abby was the first to see it and described it as being about the size of a goat with very big glowing eyes and a strangely shaped head. Will also caught a glimpse of the creature but was only able to confirm its size. There have been no officially reported sightings of the creature since.

The witnesses do seem to be credible overall so what could it be that they saw? Some have theorised that it was an alien due to its similarity to descriptions of the grays. Skeptics claim it was probably just an animal with mange and other deformities causing its head to be a strange shape. Without further appearances of the Dover Demon we may never know for sure.