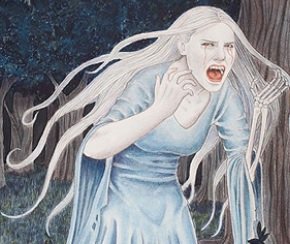 The legend of the Banshee is a familiar tale across Ireland. It is an ethereal being described as a woman with an unkempt appearance emitting a guttural, mournful wail that warns whoever hears it of the passing of a family member.

The Banshee is sometimes described as old and frail and other times as a beautiful young woman. In most accounts she is not seen at all only her horrific screams of mourning are heard in the night. Banshees have reportedly caused dogs that have heard them to become so upset that they quiver and sweat. Her cry is said to be mournful beyond all other sounds on earth; like the sound of a mother learning her only child has died.

There have been many reports of people hearing the horrible cry of the banshee before receiving news of a loved ones passing. In 1893 the Irish Times had many people write in to tell their stories.

One man wrote that he was by the bedside of his dying brother at about midnight one evening when he suddenly heard a horrible gut wrenching cry coming from outside. His brother passed the next day. Another reader recounted being by the bedside of his dying uncle who had not stirred much for days. One night he suddenly sat upright in bed and said “Ah, you’re there, poor thing, you are.”. Moments later everyone in the room heard a horrible mournful scream. The man’s uncle died the following day. Many other readers report hearing stories from friends with a similar theme. A scream is heard in the night and the next day bad news about the death of a loved one is received.

What is the Banshee? Some believe she is a fairy who is called to warn certain families of the coming death of a loved one. This privilege is believed to only be applicable to families of noble Irish or sometimes Scottish heritage. According to some legends she is the spirit of a young woman who died young who has taken on the mission of warning her family of impending death for generations to come.

While some believe the Banshee was a spirit associated with certain families who has now moved on there continues to be reports of banshee sightings throughout Ireland and the world. Skeptics claim one possible explanation for the screams heard is that it could be an animal such as a barn owl. Believers would argue that if there are barn owls in the area people would know what they sound like and would be able to identify ones cry. It also would not explain why they only hear the owl on nights before people they love die and not at other times.

It is difficult to know whether the tale of the banshee is based on a recurrent paranormal phenomenon or simply the misidentification of natural sounds. Regardless Banshees have had a significant impact on Irish folklore and culture and their stories will continue to be told by the Irish all over the world. 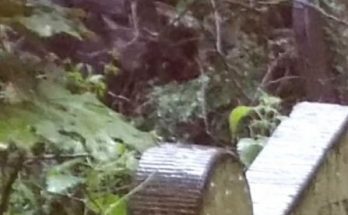 Ghosts of the General Wayne Inn

The Gray Man of Pawleys Island