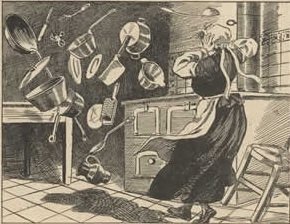 A Poltergeist, German for “noisy spirit”, is a spirit that makes noise, moves things around and is a general nuisance. Many different cultures have folklore and mythology containing Poltergeists or restless spirits. Claims of spirits that harass and torment people date back to ancient times but references to them in the history books became more common around the early 17th century.

Many accounts of Poltergeist activity show them to be capable of physically harming victims. They are also reportedly able to move objects and cause them to levitate. Their reputation as noisy ghosts comes from reported stories of knocking on walls and doors. Poltergeists are also associated with foul smells such as rotten eggs or sulfur. They have been known to cause fire to appear from nowhere and electrical phenomenon such as flickering lights or appliances turning on by themselves.

There have been many thousands of accounts of poltergeist activity throughout the centuries beginning in ancient times leading up to the modern day. Stories are passed down from generation to generation becoming a part of local folk lore and culture. Many videos of alleged poltergeist activity can be found online. Unfortunately it is impossible to prove that these recorded events are definitely of supernatural origin even if they cannot be actively debunked. Collectively they point to the existence of some kind of strange phenomenon. Even if the videos are faked they are referencing activity that happened at some point and became a part of the zeitgeist.

Parapsychologists are not in agreement as to what causes poltergeist activity. Some believe they are spirits of the dead who want to harass the living for their own reasons. Maybe they still believe the building they are in belongs to them and are trying to get the living to leave. Others believe that poltergeists are low level spirits not necessarily connected to a once living individual. They theorise that they may be a form of spirit that has yet to be incarnated into a human body and is only just beginning to gain sentience.

Skeptics believe the activity is able to be explained away as tricksters trying to prank the people around them or by hallucinations. Some parapsychologists believe that the activity could be caused by psychokinesis. They believe its possible that when someone is under great stress their emotional energy may manifest itself in a physical form and be capable of displacing objects without the knowledge of the person. It’s possible the phenomenon is caused by something else we are unable to comprehend. Perhaps with time and study Poltergeists will be understood just as we any other natural event.