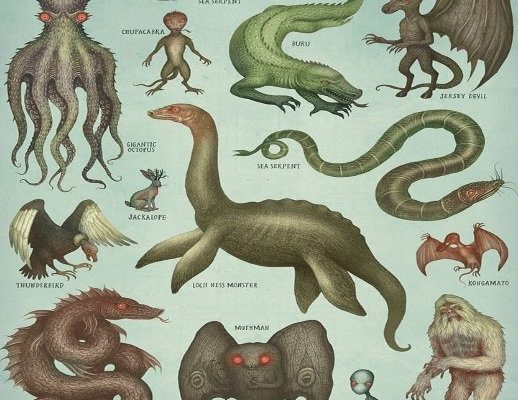 We all grew up with stories of mysterious creatures lurking in our own neck of the woods. Here is a list of some of the lesser celebrated cryptids.

A depiction of New Zealand’s majestic Taniwha raising itself out of the water.

If you’re exploring the remote waterways and swamps on the islands of New Zealand you might stumble upon a Taniwha lurking in the shadows. Taniwha are highly regarded by the indigenous Maori people as kaitiaki or protective guardians of the land they inhabit and the local people. Sometimes they are known to be dangerous or predatory. They are described as a large reptile or wingless dragon with large spines running along their back. Even the New Zealand government takes the legend of the Taniwha seriously. If a new building project is planned in an area where Taniwha are said to inhabit they project must move to another area.

Be sure to raise your bed off of the ground so the Tokoloshe can’t get you.

The tokoloshe is an evil dwarf-like water sprite that is said to be able to become invisible by drinking water or consuming a stone. Tokoloshe are said to be summoned by people to do their bidding and can be banished by a spiritual leader. Locals believe that people can protect themselves from the Tokoloshe by putting some bricks under their bed frames to raise it higher off the ground. Local Spiritual healers are also said to be able to keep the Tokoloshe at bay with special rituals.

Lock up your poultry and your children in Maryland or the Snallygaster might snatch them!

The Snallygaster is said to lurk in the darkness of the night in rural Maryland, USA. It is described as being part bird and part lizard. Stories are told of children and poultry being snatched by the snallygaster in the middle of the night never to be seen again. Local believe having a seven pointed star on the outside of your property will protect you from the snallygaster.

The Beast of Bray Road is described as a very tall human-wolf hybrid. The creature was first sighted in 1936 with many dozens of sightings to follow in the years since. People have reported seeing the creature chasing deer, running through cornfields and even being struck by their vehicles. One woman reported accidentally striking the beast with her car on Bray Road. When she got out of the car to see what had happened the beast chased her back into the car leaving large claw marks on the passenger door.

If you’re ever in the woods in North Eastern Ohio watch out for the Melon Heads.

According to legend a mad scientist named Dr. Crow snatched children and brought them to his house in the woods of North Eastern Ohio to perform grotesque medical experiments on them. Eventually the children grew tired of their mistreatment and revolted, killing Dr. Crow and fleeing into the woods. They are said to roam the woods to this day seeking out human contact.