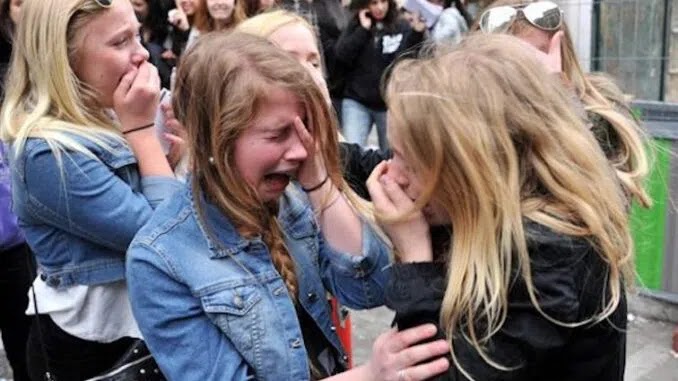 Dozens of far-left colleges and universities across America are now offering ‘therapy’ for students ‘traumatized’ by the Rittenhouse verdict.

The Libs of Tik Tok Twitter account shared a list of hysterical reactions by administrators at colleges, universities, and even high schools across America to the Kyle Rittenhouse verdict.

100percentfedup.com reports: We’ve broken down a string of examples they shared on Twitter that exposes the lunacy of the people we trust to “educate” our children. Many of the colleges used their statement on the killing of two White males by the White teenager Kyle Rittenhouse to encourage more students to join their divisive Diversity and Inclusion groups.

If you’re not concerned about what they’re doing to our next generation of leaders, you should be.

Universities and Colleges sent out a flurry of emails and statements to students and faculty following the unanimous “not guilty” on all counts decision by the Kenosha jury in the Kyle Rittenhouse case. Rittenhouse was facing murder charges over the shooting death of two white criminals in self-defense during the Kenosha riots that burned much of the city to the ground.

We begin with San Fransisco University who offered multiple options for students triggered by the Rittenhouse verdict to seek counseling.

Chaffey College used their statement to students on the Kyle Rittenhouse verdict to explain how our justice system is “broken” and appears to be suggesting students use “non-violent resistance” to protest the outcome. 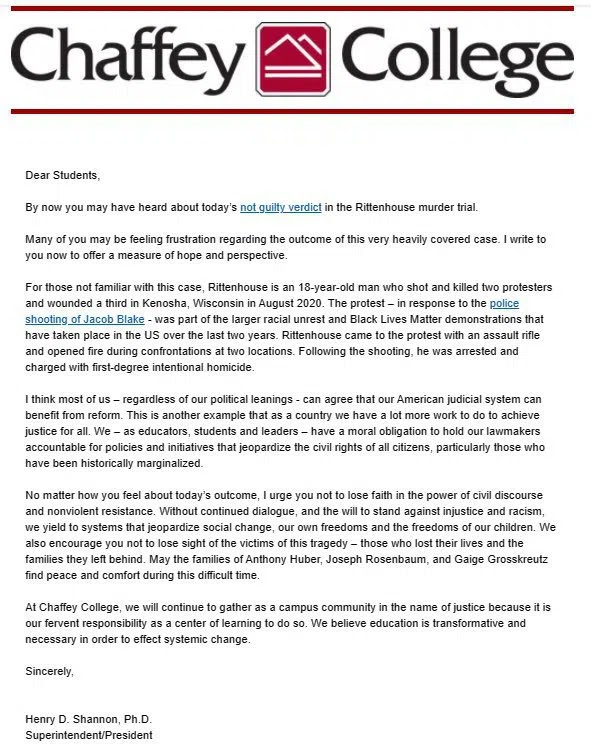 Sonoma State University offers counseling and psychological services to their students to deal with the Kyle Rittenhouse verdict.

The Oakton Community College President tells students that Rittenhouse was afforded special privileges since he’s “white” and asks White students and colleagues to examine their privilege over the verdict.

The letter to students at the University of WI La Crosse by the president and vice president of the student association in response to the Rittenhouse verdict seems like a great place for the fully-acquitted Rittenhouse to start with his defamation lawsuit.

From their statement to students: “Executives will unequivocally denounce white nationalism and hate-filled violence fully and without hesitation.”

They added, “We strongly condemn the actions of Kyle Rittenhouse, despite the court ruling on November 19, 2021,” adding, “The idea that our criminal justice system is so broken as to allow racist acts of violence to unpunished is shameful.” 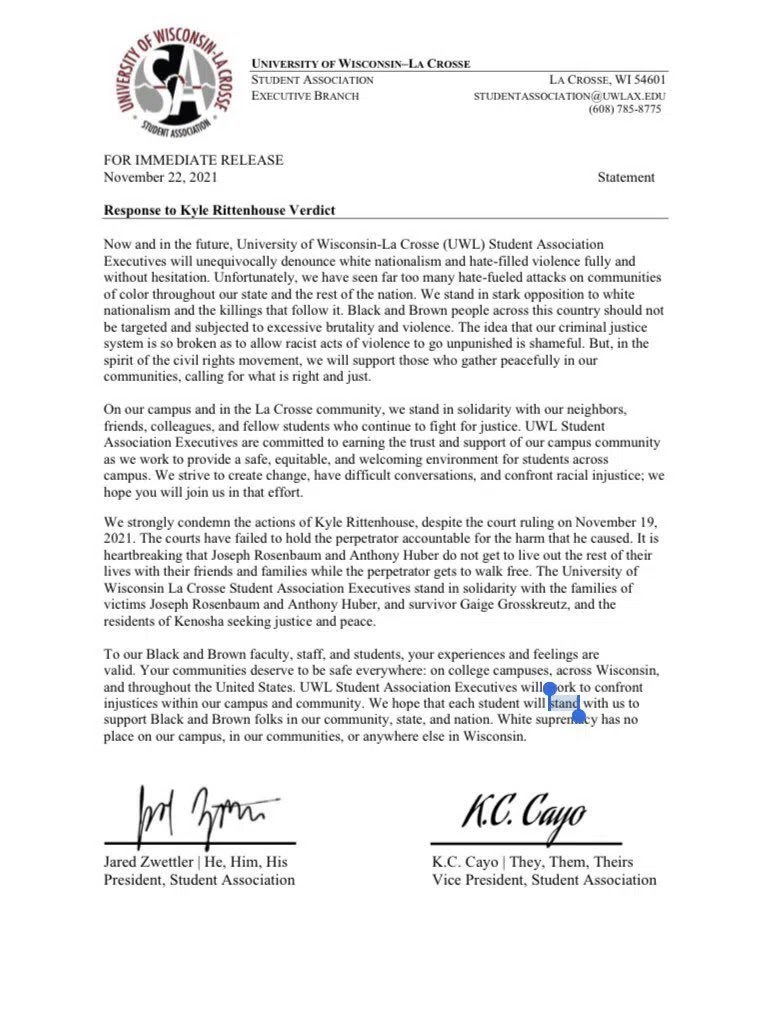 University of California: “The conclusion of this trial does not end the reckoning of systemic racism in the United States” and

Rosemont College had this to say about the shooting deaths of two White males with extensive criminal histories by a White male: “I am deeply saddened by the verdict in the Kyle Rittenhouse trial. It is, unfortunately another one of far too many examples of systemic racism that divides our society.”

Fitchburg State University is offering a space to “process” the Rittenhouse verdict:

Franklin College, Indiana, apologized to students for having to share the news of the Rittenhouse verdict, telling students that “justice fell short.”

The out-of-touch liberal Vanderbilt University thinks Kenosha is in Washington!

The University of MN St. Thomas offers counseling and psychological services to students who were “triggered” by the verdict and used their statement to recruit students to their Inclusion and Diversity group.

In 2017, the University of MI Medical School was one of several “top-notch” universities to coddle students triggered by Trump’s election victory. To help them cope, they offered an event called “Post-Election Self-Care With Food and Play.” The event included activities like coloring, blowing bubbles, sculpting with Play-Doh, and positive card making.

Now, the Univ. of MI Medical School is telling its students that the outcome of the Rittenhouse trial might have been “different” if Kyle was a “person of color.”

Southern Connecticut University held a rally for bereaved students in response to the verdict:

Gonzaga Univ. offered “support” for students affected by the verdict.

Stanford Medical School offered to counsel for those who needed help processing the verdict.

Columbia Business School offers therapy and counseling amid these challenging times of the acquittal.

The Newton High School Principal sent an email telling parents and students that self-defense is “racist” and undermines the jury system.

Brandeis University threw in their Gender & Sexuality Center for help processing the verdict.

University of Rochester offers group therapy to process emotions in a safe space.

The head of Germantown private school called the Rittenhouse verdict a “hateful event,” Like many colleges and universities; they used the verdict to help push their inclusion and diversity (segregation) groups.

Pepperdine University. A private college in Malibu, CA, told students that they are reaching out to extend care via their “President for Community Belonging and Chief Diversity Officer.”

Stanford LAW explains how the verdict “is a blow to our hearts” and “shakes our sense of belonging within the legal profession” You can’t make this up! 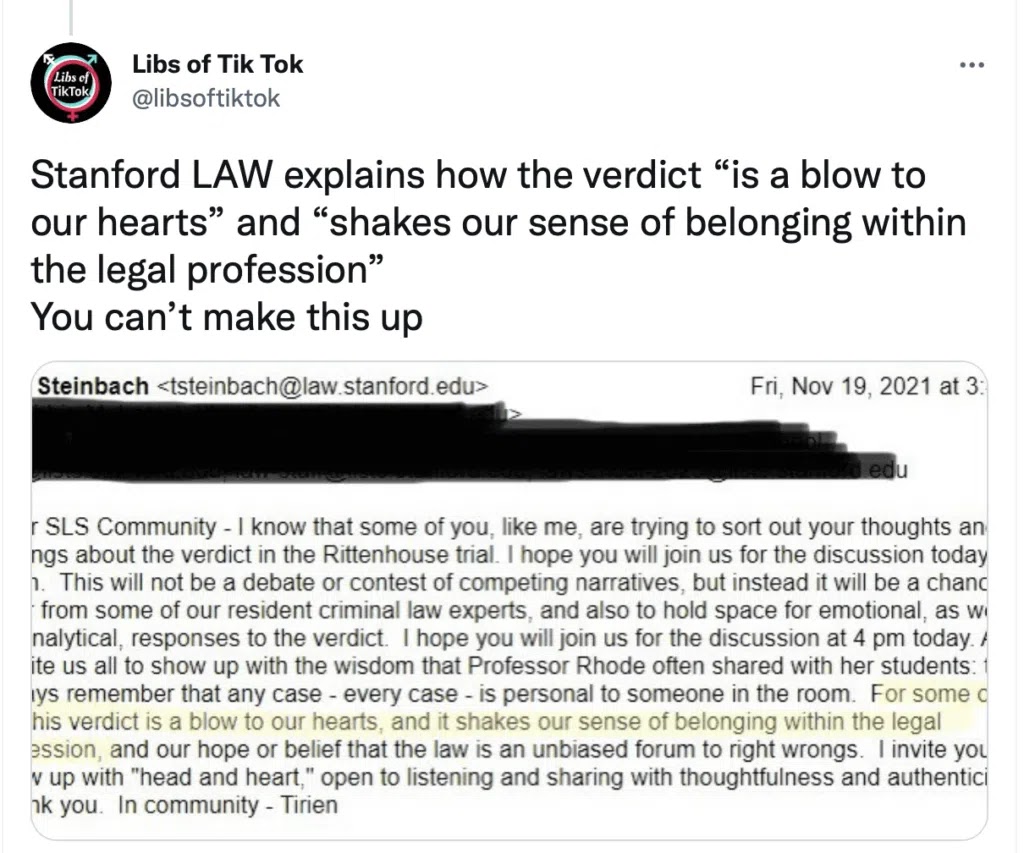 And finally, NYU offered a “post verdict reflection space” for students to help them cope.

Libs of Tik Tok ended their thread by sharing a message from Loyola Marymount University, saying, “It’s endless. I can do this all day.”

This childish and irrational behavior by people in trusted positions at colleges and universities across America is nothing new. Immediately after the 2016 presidential election, administrators and directors of “Inclusion and Diversity” (segregation) groups offered multiple forms of therapy for adult students traumatized by Trump’s victory. Parents and donors of these indoctrination centers need to stand up to this evil.

Death: Can Our Final Moment Be Euphoric?