Over the last year, a growing number of progressives and liberals have pointed to police killings of unarmed black men, rising carbon emissions and extreme weather events, and the killing of trans people as proof that the United States has failed to take action on racism, climate change, and transphobia. Others have pointed to the war on drugs, the criminalization of homelessness, and mass incarceration as evidence that little has changed in the U.S. over the last 30 years.

And yet, on each of those issues, the U.S. has made significant progress.

Police killings of African Americans in our 58 largest cities declined from 217 per year in the 1970s to 157 per year in the 2010s. Between 2011 and 2020, carbon emissions declined 14 percent in the U.S., more than in any other nation, while just 300 people died from natural disasters, a more than 90 percent decline over the past century. Public acceptance of trans people is higher than ever. The total US prison and jail population peaked in 2008 and has declined significantly ever since. Just 4 percent of state prisoners, who are 87 percent of the total prison population, are in for nonviolent drug possession; just 14 percent are in for any nonviolent drug offense. And many large cities including Los Angeles, San Francisco, and Seattle have effectively decriminalized public camping by homeless people.

Progressives respond that these gains obscure broad inequalities, and are under threat. Black Americans are killed at between two to three times the rate of white Americans, according to a Washington Post analysis of police killings between 2015 and 2020. Carbon emissions are once again rising as the U.S. emerges from the covid pandemic, and scientists believe global warming is contributing to extreme weather events. In 2020, Human Rights Campaign found that at least 44 transgender and non-gender conforming people were killed, which is the most since it started tracking fatalities in 2013, and already that number has reached 45 this year. Drug prohibition remains in effect, homeless people are still being arrested, and the U.S. continues to have one of the highest rates of incarceration in the world.

But those numbers, too, obscure important realities. There are no racial differences in police killings when accounting for whether or not the suspect was armed or a threat (“justified” vs “unjustified” shooting). While carbon emissions will rise in 2021 there is every reason to believe they will continue to decline in the future, so long as natural gas continues to replace coal, and nuclear plants continue operating. While climate change may be contributing to extreme weather events, neither the Intergovernmental Panel on Climate Change nor another other scientific body predicts it will outpace rising resilience to cause an increase in deaths from natural disasters. Researchers do not know if trans people are being killed disproportionately in comparison to cis-gender people, if trans homicides are rising, or if trans people are being killed for being trans, rather than for some other reason. Twenty-six states have decriminalized marijuana, and California and Oregon have decriminalized and legalized, respectively, the possession of all drugs. Progressive District Attorneys in San Francisco, Los Angeles and other major cities have scaled back prosecutions against people for breaking many laws related to homelessness including public camping, public drug use, and theft.

And yet many Americans would be surprised to learn any of the above information; some would reject it outright as false. Consider that, despite the decline in police killings of African Americans, the share of the public which said police violence is a serious or extremely serious problem rose from 32 to 45 percent between 2015 and 2020. Despite the decline in carbon emissions, 47 percent of the public agreed with the statement, “Carbon emissions have risen in the United States over the last 10 years,” and just 16 percent disagreed. Meanwhile, 46 percent of Americans agree with the statement, “Deaths from natural disasters will increase in the future due to climate change” and just 16 percent disagreed, despite the absence of any scientific scenario supporting such fears. And despite the lack of good evidence, mainstream news media widely reported that the killing of trans people is on the rise.

The gulf between reality and perception is alarming for reasons that go beyond the importance of having an informed electorate for a healthy liberal democracy. Distrust of the police appears to have contributed to the nearly 30% rise in homicides after the 2020 Black Lives Matter protests last year, both by embolding criminals and causing a pull-back of police. A growing body of research finds that news media coverage of climate change is contributing to rising levels of anxiety and depression among children. And there is good reason to fear that misinformation about the killing of trans and non-gender conforming individuals contributes to anxiety and depression among trans and gender dysphoric youth.

Social Media, NGOs, and the Death of God 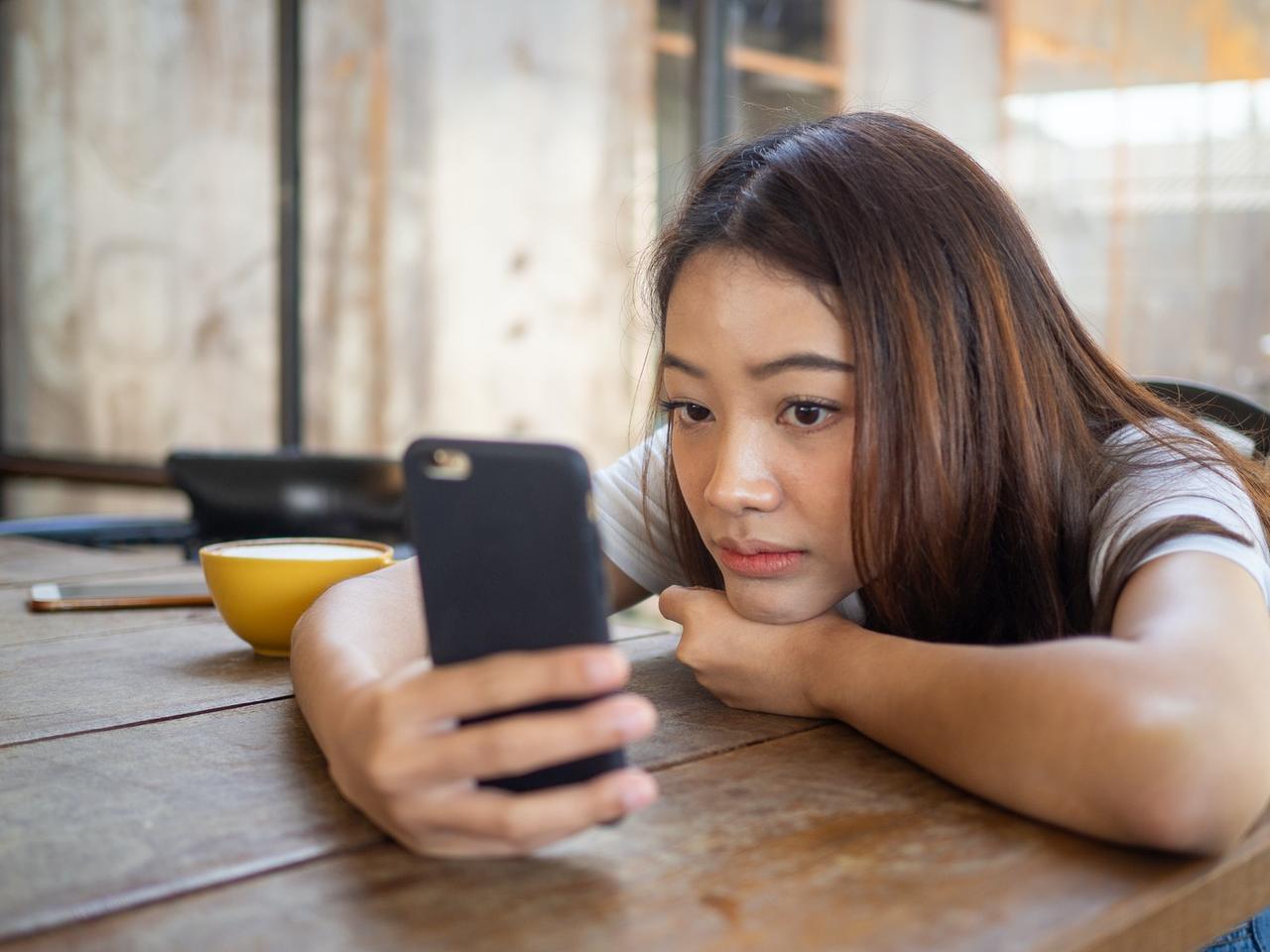 Why is that? Why does there exist such a massive divide between perception and reality on so many important issues?

Part of the reason appears to stem from the rise of social media and corresponding changes to news media over the last decade. Social media fuels rising and unwarranted certainty, dogmatism, and intolerance of viewpoint diversity and disconfirmatory information. Social media platforms including Facebook, Twitter, and Instagram reward users for sharing information popular with peers, particularly extreme views, and punish users for expressing unpopular, more moderate, and less emotional opinions. This cycle is self-reinforcing. Audiences seek out views that reinforce their own. Experts seek conclusions, and journalists write stories, which affirm the predispositions of their audiences. It may be for these reasons that much of the news media have failed to inform their audiences that there are no racial differences in police killings, that emissions are declining, and that claims of rising trans killings are unscientific.

Another reason may be due to the influence of well-funded advocacy organizations to shape public perceptions, particularly in combination with social media. Organizations including the American Civil Liberties Union, Human Rights Campaign, and Drug Policy Alliance have misled journalists, policymakers, and the public, about police killings, drug policy, and trans killings, often by simply leaving out crucial contextual information. The same has been true for climate activists, including those operating as experts and journalists, who withhold information about declining deaths from natural disasters, the cost of disasters relative to GDP growth, and declining U.S. emissions.

But neither of these explanations fully captures the religious quality of so much of the progressive discourse on issues relating to race, climate, trans, crime, drugs, homelessness, and the related issue of mental illness. A growing number of liberal, heterodoxical, and conservative thinkers alike use the word “woke” to describe the religiosity of so many progressive causes today. In his new book, Woke Racism, Columbia University linguist John McWhorter argues that Wokeism should, literally, be considered a religion.

As evidence for his argument McWhorter points to commonly held myths, like the debunked claim that the American War of Independence was fought to maintain slavery, or that racial disparities in educational performance are due to racist teachers. He points to Woke religious fervor in seeking to censor, fire, and otherwise punish heretics for holding taboo views. And McWhorter suggests that, because Wokeism meets specific psychological and spiritual needs for meaning, belonging, and status, pointing out its supernatural elements is likely to have little impact among the Woke.

But just because an ideology is dogmatic and self-righteous does not necessarily make it a religion, and so it is fair to ask whether Wokeism is anything more than a new belief system. There is no obviously mythological or supernatural element to Woke ideology, and its adherents rarely, if ever, justify their statements with reference to a god, or higher power. But a deeper look at Wokeism does, indeed, reveal a whole series of mythological and supernatural beliefs, including the idea that white people today are responsible for the racist actions of white people in the past; that climate change risks making humans extinct; and that a person can change their sex by simply identifying as the opposite sex.

While reading McWhorter’s new book, I was surprised to discover many similarities between woke racism and apocalyptic environmentalism, which in Apocalypse Never I describe as a religion. Each offers an original sin as the cause of present-day evils (e.g., slavery, the industrial revolution). Each has guilty devils (e.g., white people, “climate deniers,” etc.) sacred victims (e.g., black people, poor islanders, etc.) and what McWhorter calls “The Elect,” or people self-appointed to crusade against evil (e.g., BLM activists, Greta Thunberg, etc.). And each have a set of taboos (e.g., saying “All lives matter,” criticizing renewables, etc.) and purifying rituals (e.g., kneeling/apologizing, buying carbon offsets, etc).

I also saw parallels between woke racism, apocalyptic environmentalism, and victimology, which in San Fransicko I describe as a religion complete with the metaphysical (essentialist) view that people can be categorized as victims or oppressors, by nature of their identity or experience.

I reached out to a new friend, Peter Boghossian, a philosopher who recently resigned his post at Portland State University in response to Wokeist repression, and other experts in different Woke movements, and together we constructed a Woke Religion Taxonomy (below). It includes seven issue areas (Racism, Climate Change, Trans, Crime, Mental Illness, Drugs, and Homelessness) covered by Woke Racism, Apocalypse Never, San Fransicko, Peter’s research, and the writings of other critics of Wokeism. And it cuts across ten religious categories (Original Sin, Guilty Devils, Myths, Sacred Victims, The Elect, Supernatural Beliefs, Taboo Facts, Taboo Speech, Purifying Rituals, Purifying Speech). We were surprised by how straightforward it was to fill in each category, and by the fascinating similarities and differences between them.

We decided to publish the Woke Religion Taxonomy because it was helpful to our own understanding of Wokeism as a religion, and we felt it might help others. The Taxonomy identifies common myths and supernatural beliefs and helps explain why so many people continue to hold them, despite overwhelming evidence that they are false. We are under no illusion that the Taxonomy will reduce the power that Wokeism holds over true believers. But we also believe it will help orient those who are confused by its irrationalism, and are seeking an accessible overview. Finally, we are publishing it because we recognize that we might be wrong, either about matters of fact or classification, and hope it will encourage a healthy discussion and debate. As such, we have published it with the caveat that it is “Version 1.0” with the expectation that we will revise it in the future.

Both Peter and I would like to stress that we have published the Taxonomy in service of the liberal and democratic project of social and environmental progress, which we believe to be under threat from Wokeism. We believe the U.S. is well-positioned to reduce police killings, crime, and carbon emissions; protect the lives and the mental health of trans, non-gender conforming, and cis-gender people; and better treat of the mentally ill and drug addicted. But doing so will require that Wokeism weaken its grip over the American psyche. 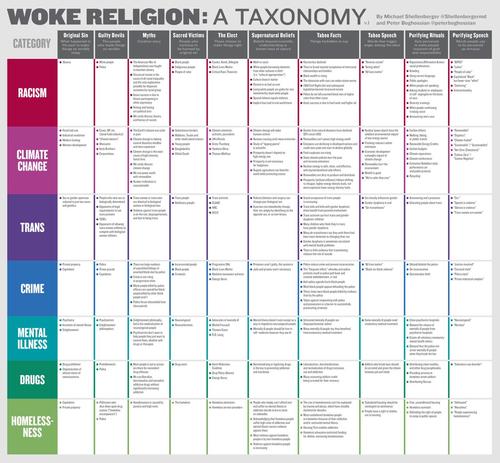 Michael Shellenberger is a Time Magazine “Hero of the Environment,”Green Book Award winner, and the founder and president of Environmental Progress. He is author of just launched book San Fransicko (Harper Collins) and the best-selling book, Apocalypse Never (Harper Collins June 30, 2020). Subscribe To Michael’s substack here

Authored by Michael Shellenberger via Substack