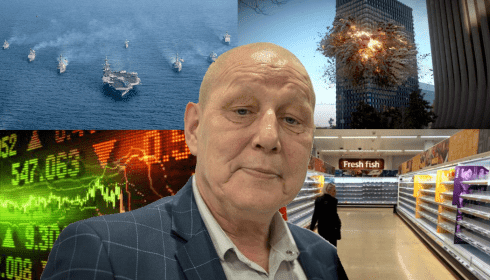 As the year 2022 approaches, the planet is shaking more and more, waiting for the new horrors promised by politicians to fight a pandemic or to fight something else. But as Mr. Krzysztof Jackowski says in his latest video, it is too early to stress about 2022, because 2021 is going to surprise the world. The digest of the wang of Poles’ favorite clairvoyant was compiled by Mr. gbkEmilgbk:

The collapse of the economy will be announced as early as this year.  I have a feeling the high prices of semi-finished goods, raw materials and energy will be blamed. This will set off a chain and the chain will be short.  Although the word “crash” will probably be an exaggeration for now, something is bound to happen to the stock market and some important currency.
It will be a very unusual crash, an incomprehensible drop in the value of some capital, as if someone had secretly taken a lot of money out of it. The stock market will start to fall and it will completely destroy the weak economies, even the strong economies of the EU and the USA will undermine it all. Prices will begin to rise, deficits of everything will worsen and these deficits will become something very widespread and expanding.
Next will come the stoppages of numerous industries. At first the shutdowns will be intermittent, until it becomes a system and starts a chain of other shutdowns. This will cause an unimaginable crisis such as we have never had in the past.
We will face a crisis that will roll the planet like an ice rink. Not right this year, more likely next year, but by the end of 2021, it will begin. This will lead society into very obvious impoverishment – there will come a point at which politicians and local government officials will not be able to compensate.
People ask me: what will the situation in Great Britain look like? I think it will be Ok there, as long as it is safe to keep savings in pounds. Also, this crisis that awaits us will affect Scandinavia less – Norway, Sweden, Finland. Of course, these countries will feel everything, but not so sharply. Poland is in a much worse situation compared to them, nevertheless, it is going to be a big war and something tells me that we will even make a little money on it.
I’ve already told you about how this is going to start in previous clips: a big city, a big building, a big fire.  And it’s going to be on worldwide television. In Poland this will definitely not happen, but there will be other startups.  There will be a lot of hype and it will be loud.
The response will be immediate, but very weak, symbolic. Then a few hours of silence will follow, followed by retaliation, which everyone will consider inadequate. When this happens, we will feel and see that in many countries there will be a kind of alert, a heightened military readiness.
Ships will begin to accumulate in the Mediterranean Sea in great numbers. At first there will be a conflict solely between two states, but then everyone will intervene and begin to surround one region with their fleets. I see it as the Mediterranean Sea, but it may be the Persian Gulf or even a totally different region.
This will be the point at which the world will face a very serious threat, a huge deployment of forces will begin. And everyone will be watching to see who and how they will behave. And then all of a sudden a mediator will appear, a leader of the Arab world. All eyes will be on him and it will even seem that the conflict is about to be solved. But suddenly the whole peace process will collapse.
They ask me, what side will Russia be on?  Russia will not join the pact and will try to remain neutral so as not to get into the turmoil that awaits the world. But it will express its dissent by imposing some kind of sanctions against Europe.
All in all, what is going on around here now is not going to end soon. We have a very problematic 3.5 years ahead of us, two of which we have passed relatively well. But the second part will be less easy and very, very dangerous.
In the end, the world will sort of split into three parts, three forces. There will be no protests or revolutions, we won’t be allowed.  And when hunger and hopelessness become our primary advisors, we will settle for much more than we think. And the way we lived before 2019 will become more and more incomprehensible to us, it will become a fiction and a fantasy that we will tell our children about.