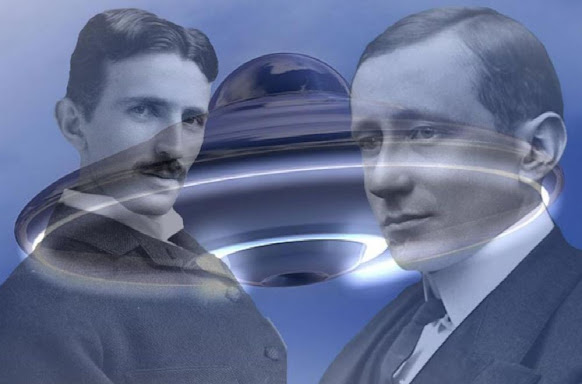 History is replete with stories of lost magical cities. Stories such as the lost city of Z, which claimed the life of legendary explorer Percy Fawcett and his son. Or the lost city of Hy-Brazil, a technology-advanced Phantom Island which was known by early mariners to occasionally appear in the Atlantic.

The crystalline towers of its main city jutting up off the horizon. Let us not forget Atlantis, Lemuria and even Hyperborea. All mythical islands lost to time or natural disaster. Even Shamballa and Agartha, which were lost in the snows of the Himalayas.
There are still other lesser known, but equally as fascinating lost cities which appear to stand the test of time. The commonality? They all seem to have some sort of amazing high technology and also appear to be phantoms. It is one of those fabled cities which we will now explore. A city of true amazement, a technological wonderland, and a city without a name which apparently has remained hidden for almost a century. 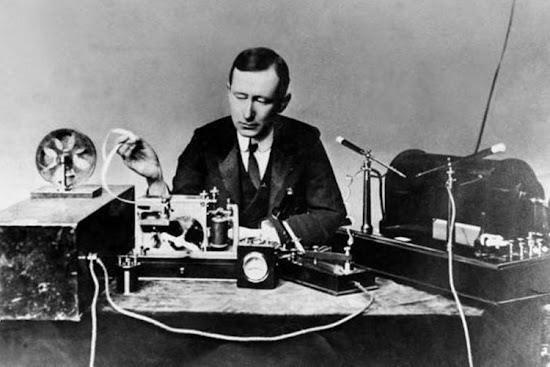 Guglielmo Marconi
For more then 30 years there has been a persistent rumor. A rumor, which has not been widely reported but is fascinating nonetheless this nameless city buried deep within the Andes Mountains and was founded by none other than Guglielmo Marconi and his protégé’s. Powered by Tesla technology and hidden from the world.
The story as it now exists was originally discussed in a book called “The Mysteries of the Andes” by Robert Charroux and published in 1974. It was later translated from French and published by Avon books in 1977. Charroux, a world class Fortean adventurer, had gone to South America in search of a hidden codex called the ICA Codex which purported to show a lost human civilization millions of years old, as well as lost underground tunnels and cities.
The story was then picked up by Renato Vasco and published in his book “Man Made UFOs” and from there it has simmered.
The story goes something like this.
Marconi, the son of a wealthy Italian family had started working on radio technology with Tesla and pioneered radio communication. In 1896 he broadcast a transmission nine miles across the Bristol channel and by 1899 was sending transmissions across the English channel some 30 miles from his transmitter. In 1901, after improving his transmission equipment, he broadcast a transmission from Cornwall England to St. John’s in Newfoundland Canada.
In 1909 Marconi, along with Karl Braun, was awarded the Nobel Prize for Physics.
By the 1930’s Marconi, and his student Landini, were working on Antigravity. In fact Marconi, who by this time was a millionaire many times over, converted his Yacht the “Electra” into a floating super lab where they successfully sent signals through the earth, much in the way Tesla did.
In June of 1936 Marconi made another leap forward and demonstrated a energy wave canon for Benito Mussolini on a busy autostrada outside Milan. Apparently, according to the story at least, Mussolini had asked his wife Rachele but be at the motorway at precisely 3:30pm. Marconi triggered the device and for over 30 minutes every car suffered a complete electrical failure. At precisely 3:35pm Marconi switched the device off and the car, including his wife’s, started up.
Mussolini was said to have been quite pleased with the result and began to move towards the notion of weaponizing it. This displeased Pope Pius XI who is said to have taken an interest in the device and was able to prevent further research. 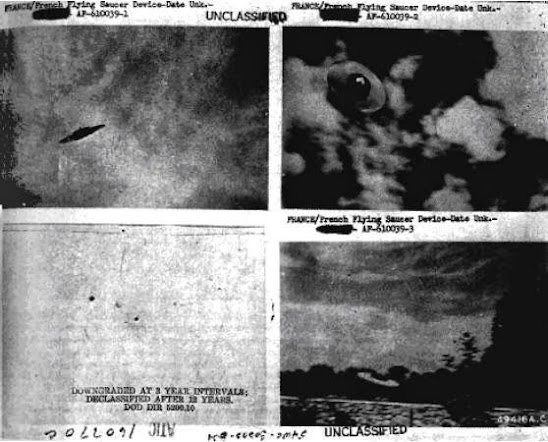 According to Bibliotecapleyades these four photos are from the U.S. Air Force Blue Book files and show a “French Flying Saucer Device” that is alleged to be one of the craft used by Marconi and built at the secret city in South America. The photos are known to have been taken in 1953.
Fearing repercussions from the Vatican, Marconi then faked his own death then sailed his yacht to South America sometime in 1937. It is believed that Marconi took some of the brightest minds in Italian research when he left including Fulcanlli and Landini. The total count was about 98 total scientists who disappeared with Marconi.
Their ultimate destination was said to have been in the southern jungles of Venezuela where they setup a technological utopia complete with free-energy motors, Tesla technology and even a new kind of aircraft, which used a form of anti-gravity Marconi and Landini were said to have perfected.
It was in that secret city the scientists are said to have perfected many of the free-energy and Tesla technologies which we read about today. They are also said to have dedicated themselves to the peaceful application of these technologies and remained isolated from the rest of society even to this day. Working in the shadows to provide new and updated ecologically friendly technology.
The story first came to light in the book “The Mysteries of the Andes” by Robert Charroux. In the book he discussed having heard the story of the Cuidad Subterranea de los Andes from a Mexican Journalist named Mario Rojas Avendaro who had heard about the city “from Caracas to Santiago” which eventually prompted Avendaro to investigate the story futher.
Avendaro claimed that most of the detailed information of the secret city had come from a man named Naisso Genovese who had contacted him about his research into the city. Genvoese had been a student of Marconi and had spent time with him in the city. At the time he contacted Avendaro, Genovese was working at a physics teacher at a school in Baja California. 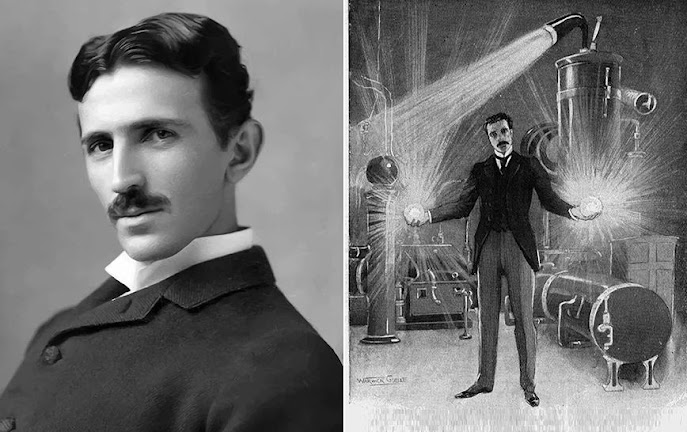 Genovese claimed to have spent a number of years working in the city and even published an account of a alleged trip to Mars using a Tesla / Marconi powered flying saucer. In the 1950’s he wrote about the trip in a very rare, and frankly odd, book entitled “My Trip to Mars.” A book which, although it was never published in English did come out in numerous other languages.
In discussing the city with Avendaro, Genovese claimed that it had been built with Marconi’s fortune. Marconi, before his death, had shifted large amounts of his fortune into secret accounts which he accessed to acquire the materials he needed.
Genovese also claimed that by 1946 the scientists had built a massive cosmic energy collector based on Marconi’s improvement of Tesla’s original designs. He also went into some detail about the massive and amazing research facilities they had constructed saying it was probably the greatest laboratory ever built on the planet.
By 1952 Genovese claimed they had constructed a new type of aircraft with an almost limitless supply of energy, and scientists had used it to explore almost the entire globe including the oceans.
The craft was said to be able to accelerate to 500,000 miles per hour and was built out of a new alloy which could withstand enormous enormous pressures of the deep ocean as well as traveling through the atmosphere at extremely high rates of speed. The only problem he said the device had was acceleration. It was something the scientists were still working on.
The implication was that the device was also capable of stellar, possibly interstellar, travel and it had also been used to visit various planets in the solar system. We know from Genovese that he claimed regular trips were being made to the Moon and Mars. The implication being that a outpost could have possibly been setup at one or both of those locations. 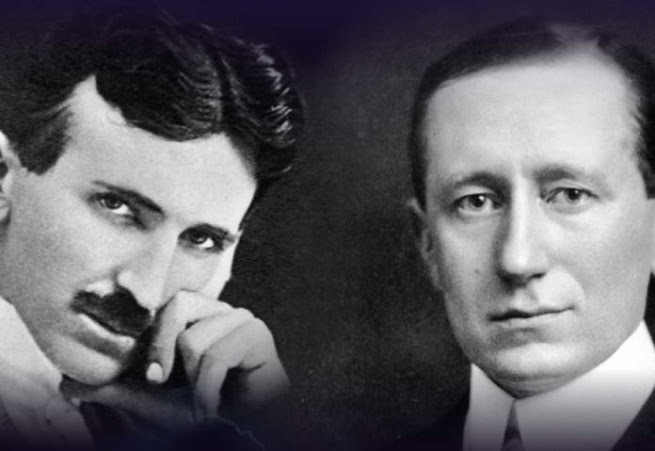 Avendaro then pressed Genovese for the location of the secret city. Genovese responded by saying that it was located at the bottom of a crater, was mostly underground and was at almost 13,000 feet above sea level. It is believed that the city is located in an extinct volcano in the eastern Andean Cordillera somewhere in the Bolivian or Venezuelan mountains.
That seems to be where the story ended, and no further investigation has been made. Some researchers have hypothesized that Tesla, having been contacted by Marconi, faked his death and also traveled to the magical city.
But is a hidden high tech city really feasible? Given the region where the city is supposedly hidden and the sheer size and vastness of the unexplored land in that region it is completely plausible such a city could indeed exist.
Especially if that scientists there had perfected free-energy and anti-gravity. With those two technological leaps there is really no limit to what they could have achieved.
Is this Cuidad Subterranea de los Andes, or Underground City of the Andes, real? We will probably never know for sure but it does remain one of the more mysterious and enigmatic hidden cities of legend. If it is real, there was certainly the brain power required to make such stunning technological advancements but for now it will have to remain a lost city.
Source: www.paranoiamagazine.com