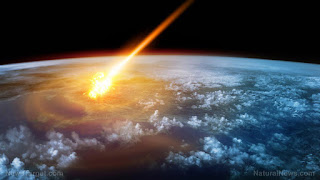 (Planet Today) The Mid-Atlantic state of New Hampshire was recently roused by a mysterious explosion. Adding to the mystery was the fact that earthquake monitors detected no seismic activity in the region that could have caused the boom. Thus, many speculate that a meteor may have caused the loud explosion felt and heard in different towns in the state.

Residents of New Hampshire reported hearing the explosion on the morning of Oct. 10. Many shared their experiences to news outlets, thinking that an earthquake may have caused it.

New Boston resident Dan Brian said: “There was a kind of a loud boom that rattled our whole house. It had like an audible boom to it. It was very strange, that’s why everyone thought it was like an explosion at first.” Meanwhile, Weare resident Richard Bossart described the explosion as “a huge thump, like a heavy person had landed on their heels on our second floor.”

Manchester residents Daniel and Cindy Howland also reported hearing the explosion. In an email sent to EarthFiles.com, the Howlands reported hearing “a thud followed by a slight metal-like crash noise” that lasted two seconds. The Howlands’ email says: “Cindy [adds that] she felt a vibration that [Daniel] did not probably [feel] because [he] was in the basement.”

New Boston Fire Department (NBFD) Chief Dan MacDonald likewise confirmed the explosion, saying that he himself heard the boom and felt a “slight vibration.” Soon after, the NBFD chief received an influx of calls reporting the explosion.

Local New Hampshire television station WMUR 9 reported that many of its viewers sent emails about the explosion. A viewer from Merrimack said the huge bang caused their house to shake, while another resident from Goffstown said the shaking caused a picture on their wall to fall. A third resident, this time from Fitzwilliam, also said that they experienced the shaking at around 11:30 a.m. of Oct. 10.

Explosion had nothing to do with earthquakes or military aircraft

Officials from the U.S. Geological Survey (USGS) insist they have found no evidence of earthquakes or any seismic activity in the New England region during the past week. Geophysicist Paul Caruso of the USGS National Earthquake Center in Golden Colorado says he found nothing in his Oct. 10 seismographs that indicated an earthquake had occurred.

Weston Observatory scientist John Ebel concurs with the USGS report. “We see nothing on our seismic stations [indicating] that there was any earthquake activity in the middle of the day in New Hampshire.”

The explosion also has nothing to do with military aircraft, the New Hampshire Department of Safety (DOS) insists. DOS Public Information Officer Paul Raymond says that the Federal Aviation Administration‘s Regional Operations Center reported “no military plane activity over New Hampshire on Sunday morning.” Raymond adds that statewide 911 only received one report of the explosion, while New Hampshire State Police received none.

Given that the explosion was unrelated to earthquakes or military aircraft, scientists posit that the explosion may have been caused by a meteor. Ebel says: “I would look for a natural event, something coming into the atmosphere past the speed of sound.” He mentions the possibility of a meteor or meteorite “probably causing enough energy to be released that people heard it here down on the ground.”

Other scientists appear to support Ebel’s theory. They attribute the explosion to a sonic boom from a meteor entering the atmosphere at supersonic speed and quickly burning up. While proving that a meteor is behind the explosion requires people to have seen it, the overcast skies in the region on that day may have prevented people from spotting it.

Massachusetts Institute of Technology scientist Ryan Volz is one of those agreeing with the meteor theory. “The Earth is always passing through this sort of dust of sporadic meteoroids … [that are] mostly very small, dust-sized particles. They’re creating meteor events that no one notices except scientists that try and look for them. But sometimes, you get these bigger meteoroids, and they create something that everybody notices,” he says.

Unexplained.news has more articles about mysterious events such as the one in New Hampshire.