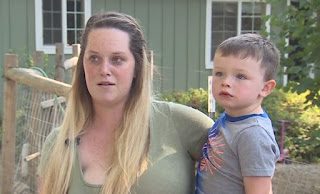 Jake Gorba, his wife Victoria, and their three kids decided to take their four-wheeler up to Shuteye Peak on Wednesday. The family stopped to eat lunch and that’s when the couple’s three-year-old Kaiden began talking to someone.
“He was just in our car and he was pointing out to a certain spot in the meadow,” said Victoria.
Kadyn told his parents there was a woman lying face down with her legs straight up in the air in a nearby meadow. According to Kaiden, the woman was unable to speak or move and needed help.
“He flat out told us, ‘mom she’s dead, she needs our help’ and that’s when I got the goosebumps and I was like, oh my gosh,” Victoria.
This all happened when the Gorba family stopped for lunch.
“He goes ‘yeah there’s a lady over in the meadow in a black shirt’ and I got goosebumps,” said Victoria, “He says ‘she needs our help but she’s dead and she’s laying face down with her legs up and she can’t talk to me but she’s over there we need to go help her.’”
Jake and Victoria checked out the meadow but saw nothing.
“He kept saying ‘trust me, trust me mom’ and I was like I trust you but you know I believe you 100%,” said Victoria.
The family was so spooked by what the three-year-old had so adamantly shared, that they decided to end their day early and head home. Then, they posted about the strange occurrence on Facebook.
“We put it on Facebook to see if anybody knew anything about the area and come to find out that there was a lady messing with the description that he described to us within a 5-mile radius of where we were,” said Victoria.
Sandra Hughes had gone missing in that area in June of 2020. According to Victoria, her three-year-old’s detailed description of the woman’s hair and clothing was identical to the description of Hughes.
“He was very adamant that we needed to help her and he described her down to blue hair, he said ‘she has a black shirt bluejeans and blue hair mom’ that’s the exact description of her when she went missing,” said Victoria.
Victoria says Kaiden was also able to identify the woman he’d seen in 3 out of 4 photos of Hughes.
Madera County Sheriff Corporal Chris Williams saw the Facebook post and contacted the family to further investigate.
“The corporal in charge of her case actually reached out to us on Facebook and was like ‘hey we want more information and we want to bring you guys up there and see if you could point us in the direction.’”
Corporal Williams has been investigating the disappearance of Sandra Hughes since the beginning of the investigation.
On Thursday, two Madera County Sheriff’s Deputies traveled back up to the meadow with Jake and his son to investigate. The deputies found no new evidence and the case remains open.
“If she was possibly a ghost looking for some help, I hope that he could’ve at least helped and maybe help the family find her because it’s been a long time apparently since she’s been gone,” said Victoria.
The four-wheeler that the family was traveling in when this whole spooky experience took place is now referred to as the “ghost runner” and is for sale.
The family says they will continue visiting different trails up in the mountains but there are definitely some spots they won’t stop at anymore.
The Madera County Sheriff’s Office confirmed that they did receive a report of a possible sighting and they went out to the location for any leads but no new evidence was found.
As of right now, the case remains open with no new leads.
If you have any information about the disappearance of Sandra Hughes, you can contact the Madera County Sheriff’s Office.
Source: www.msn.com

Physicist: Why We Haven’t Seen Extra-Terrestrials?

Scientists Talk About The “Smell Of Death”