Reddit user “PerpetualConnection” recently told a story that he encountered something very strange and frightening in the night forest.

The ‘Sierra Sounds’: You Can Listen To The Bigfoots Talking To Each Other

Cryptozoologist Scott White of the International Bigfoot Society spoke to an elderly woman named Rita Swift, who told him a story told by her grandfather.

Her grandfather’s name was George Huhn, and in the late 19th century he worked as an engineer on a train that ran along the US-Canada border.

One night, while they were passing through a forest somewhere in the middle of nowhere, their train hit something on the tracks and it was something so large that it damaged the cowcatcher – a device made of metal rods that was attached to the front of the train.

Below is her story:

“My name is Rita Swift. I live in Orange Co. California. In 1945, my grandfather George Huhn told me a story about the time his train hit a large Ape creature and bent the cow catcher on his train.

“This was in the 1880’s and he was an engineer on a train that ran along the borders of the US and Canada. It was night, and all of a sudden their train hit something and they stopped the train, because the cowcatcher was dragging on the tracks.

At first they thought it was a moose, but when they all got out with their lanterns, they discovered this huge smelly Ape, hung up in the catcher. They had only lanterns for light, and they were in the forest, basically in the middle of nowhere.

“It took most of the crew to pick it up and lift it into an open flat car. They noticed it was structured differently from a Gorilla of Ape, and smelled so bad, the crew got the smell on them.

“They left it on the flat car, because it took at least 2 hours to straighten out the cow catcher. Good thing my great grandfather was also a blacksmith. They were at least 2 hours from the next water tower and station of sorts.

“The break man noticed Indians sneaking around in the forest, but thought they had disappeared. When they were ready to go, the crew checked on their smelly passenger, but he was gone.

“They looked for tracks and decided the Indians had dragged it away into the forest and across a stream. They found the tracks and pieces of hair and of course the smell. They washed up in the stream and were glad to get rid of it. The smell had even remained in the flat car.

“My great grandfather took pieces of the hair back, and gave it to a doctor he knew in Michigan. They had all decided the creature had escaped from a circus or sideshow. Great grandfather thought it was 8 feet tall and weighed at least 500 lbs.

“It took six men to carry it off the tracks. When my daughter was a student at California State University at Fullerton in 1986, I met a Professor of Anthropology. The reason I was there, was I donated Indonesian Fighting Swords to her dept.

“They were very old and had belonged to my husband. I just didn’t feel comfortable having them in my home anymore. I noticed in her office she had information on the walls about Big Foot. I told her the story and she believed it was documented.

“My grandfather said the Ape had a different face than what he remembered of a Gorilla. He said the teeth were like humans, but extremely wide and large. The body hair was thick dark brown, with light tipping and the eyes were large and dark. He said they agreed it was a male because of it’s genitalia.

“Grandfather continued as a railroad engineer on the Colorado Wyoming line until he retired in 1925. He fought off outlaws with his six shooter from the cab. I have a photo of Grandfather with the crew, stopped in Eads, Colorado, with a large cannon hole in the side of the engine.

“This was in 1898, when some outlaws on horses pulled up an old Confederate cannon along the tracks, and fired at the engine. The crew chased them away, but left the train damaged. They were on their way to Durango carrying bank money from Denver.

“Grandfather would never tell stories that were not true. He was a devout Methodist, and said his prayers so loud every night, the whole house could hear him.

“He had originally come from Amish in Mercer, Co., Pa., but left to fight for the Union in the Civil War. His father did not accept his decision, and he never returned to Mercer Co. He was born in 1845 and died in 1947, in Claremont California.” 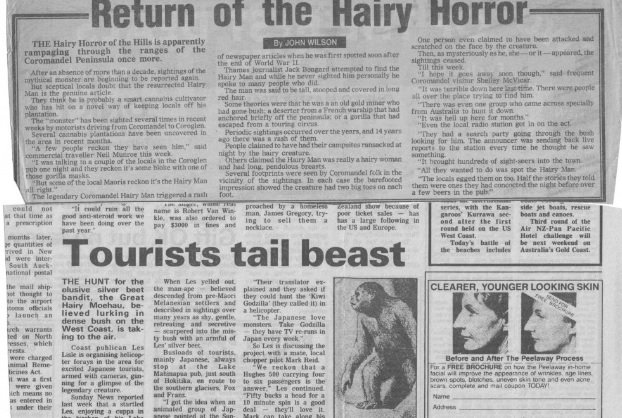 The Moehau is a legendary monster in Maori mythology, originating from the central plateau region of the North Island of New Zealand. It is said to be a large, hairy, man-like creature that inhabits the dense forests of the region and is known for its fearsome roar and aggressive behavior.

The Moehau is described in Maori legend as a large, hairy, human-like creature with a fierce appearance. It is said to have long arms that reach down to its knees, and sharp claws on its hands and feet. Its hair is described as dark and shaggy, covering its entire body, and its face is said to be savage and frightening.

The Moehau is typically depicted as being six-seven feet tall, with a powerful build and an intimidating presence. Some legends describe the creature as having a mane of hair around its neck and glowing eyes that can be seen from a distance in the darkness of the forest.

Reports of sightings of the Moehau are rare and mainly come from the central plateau region of the North Island of New Zealand, where the creature is said to inhabit. However, these reports are largely anecdotal and lack concrete evidence.

The sightings are often described as fleeting and difficult to verify, with people claiming to have seen a large, hairy, human-like creature moving quickly through the forest or hearing its distinctive roar echoing through the trees.

The most common evidence of the Moehau is found in the form of footprints.

In 1903 some very large footprints were found in the Karangahake Gorge in the Coromandel.

In 1971 a trail of huge footprints was discovered on snow-covered ground by a park ranger in the Karangahake Gorge.

In 1983 a man hunting a deer came across fresh footprints near the Heaphy River that appeared to be far larger then a normal human’s.

In 1991 in the Cameron Mountains of the South Island some campers hastily abandoned their camp after finding some unsettlingly large footprints near their site.

Several witnesses report having been attacked or chased by a Moehau. In 1970 some campers in the Coromandel abandoned their camp after a 6ft tall hairy man beast continued to screamed loudly and threw rocks at them.

Just two years later in the same area a hunter watched as a 6ft tall, ape-like creature worked its way through the bush on the other side of the gully. The hunter went to investigate and found large footprints left behind.

An undated report in New Zealand’s Sunday News told of the owner of the Lake Mahinapua Pub on the South Island’s West Coast regularly having his garden raided by a huge man-beast. The Moehau was particularly fond of his silver beet.

A few early account existed where people were reportedly killed by Moehau. The headless body of a prospector was found in the Martha Mine in 1882 and was blamed on a Moehau. A few years later, not far from the Martha Mine, a woman was dragged from her shack and found dead with a snapped neck a few hundred meters away.

Was the Moehau an Escaped Gorilla?

The theory that the Moehau is an escaped gorilla is a relatively recent and controversial one. It suggests that the creature may have escaped from a zoo or animal park in New Zealand and survived in the wild, leading to reports of sightings and encounters. This theory is based on the idea that the description of the Moehau as a large, hairy, man-like creature with sharp claws and a fearsome appearance is consistent with the physical characteristics of gorillas.

However, this theory is largely speculative and lacks concrete evidence. Gorillas are native to Africa and are not found in the wild in New Zealand, so it is unlikely that one could have escaped and survived in the wild there. Additionally, the forested regions of the central plateau are remote and inhospitable, making it unlikely that an escaped gorilla would be able to thrive there. The majority of experts in the field reject the idea that the Moehau is an escaped gorilla, and it remains a creature of legend and myth in Maori culture.

Have you ever seen a Moehau or something similar in your neck of the woods? Let us know in the comments!

If you enjoyed this article you may be interested in the Moehau’s cousins: Bigfoot and Batutut.