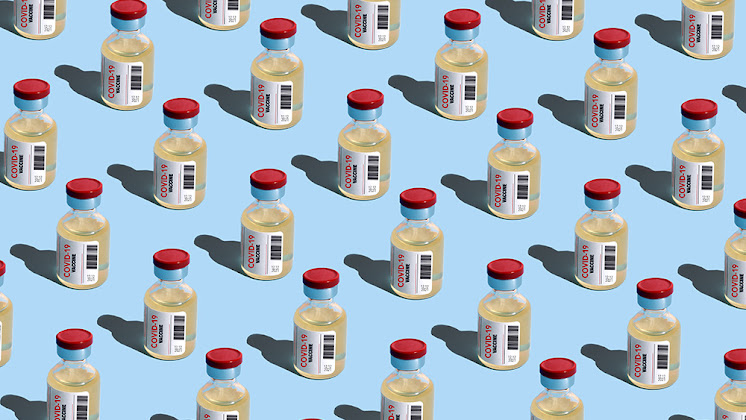 Ah, yes. An emergency authorized vaccine for a virus that is insanely survivable for healthy people is the exact same as the moral argument against walking in butt naked to a store. It’s also okay that half of America starves based on this premise.”

If Lemon’s comments had been said about ANY other group, they would be banned as hate speech and incitement to violence. CNN’s Don Lemon has lowest-rated week since struggling program switched names shows that Lemon is struggling to maintain an audience. So, these comments may have been an attempt to get publicity.

Are the Unvaxxed the New “Jews”?

Are The Unvaxxed The ‘New Jews’? points out:

“Physicians and medically trained academics, many of whom were proponents of ‘racial hygiene,’ or eugenics, legitimized and helped to implement Nazi policies aiming to “cleanse” German society of people viewed as biologic threats to the nation’s health. Racial-hygiene measures began with the mass sterilization of the “genetically diseased” and ended with the near-annihilation of European Jewry.”

Combined with terror to intimidate those who did not comply, a new state propaganda apparatus headed by Joseph Goebbels manipulated and deceived the German population and the outside world. Propagandists preached an appealing message of national unity and a utopian future that resonated with millions of Germans. They also waged campaigns that facilitated the persecution of Jews and others excluded from the Nazi vision of the ‘National Community.‘”

In the name of public health – COVID-19 Eradication Hygiene 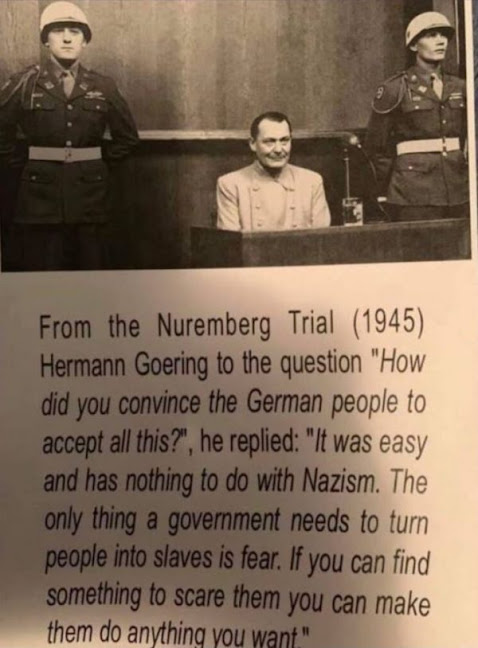 “This topic [the Holocaust] allows us to study the ramifications of prejudice, racism, and stereotyping … to explore the danger of silence and indifference in the face of human rights abuses, and to examine the use and abuse of power. How Will It End, This Time???” 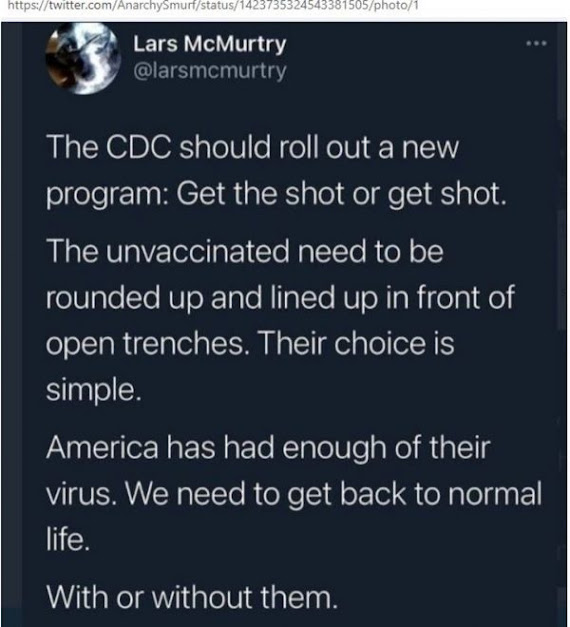 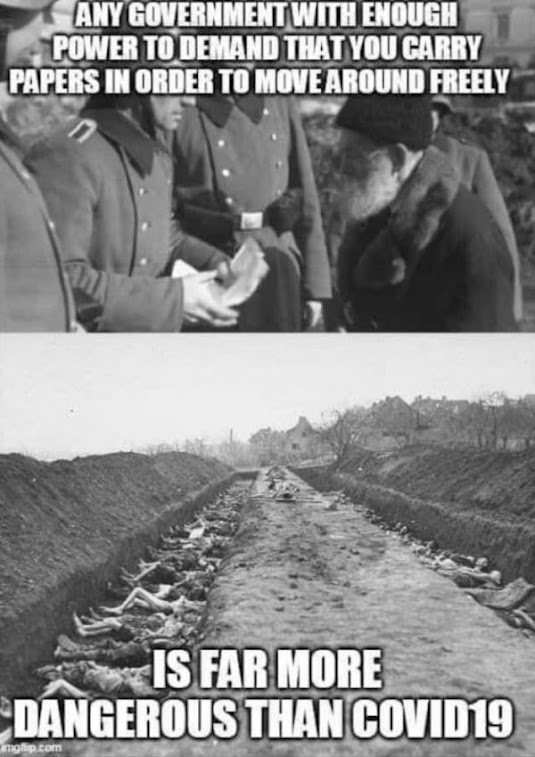 “Interestingly, as noted in a February 15, 2021, article in The Conversation [Why more contagious variants are emerging now, more than a year into the COVID-19 pandemic], variants with ‘measurably different behavior’ did not emerge until mid-December 2020, which just so happens to be the exact time at which the first COVID shots were rolled out…

In a July 30, 2021 report, Sharyl Attkisson cited data from the U.S. Centers for Disease Control and Prevention, which show that 74% of COVID-19 diagnoses in Barnstable County, Massachusetts, between July 6 through July 25, 2021, and 80% of hospitalizations, were among the fully vaccinated.”

In the letter, Bossche warned that implementing a global mass vaccination campaign during the height of the pandemic could create an ‘uncontrollable monster’ where evolutionary pressure will force the emergence of new and potentially more dangerous mutations.

‘There can be no doubt that continued mass vaccination campaigns will enable new, more infectious viral variants to become increasingly dominant and ultimately result in a dramatic incline in new cases despite enhanced vaccine coverage rates. There can be no doubt either that this situation will soon lead to complete resistance of circulating variants to the current vaccines,’ Bossche wrote.”

Top Virologist’s Urgent Call to WHO: Stop The COVID Vaccines

In Urgent call to WHO, from Geert Vanden Bossche (DMV, Phd), Dr. Bossche issued an alarm in March 2021. Dr. Bosche pointed out:

“Mass infection prevention and mass vaccination with leaky Covid-19 vaccines in the midst of the pandemic can only breed highly infectious variants.” 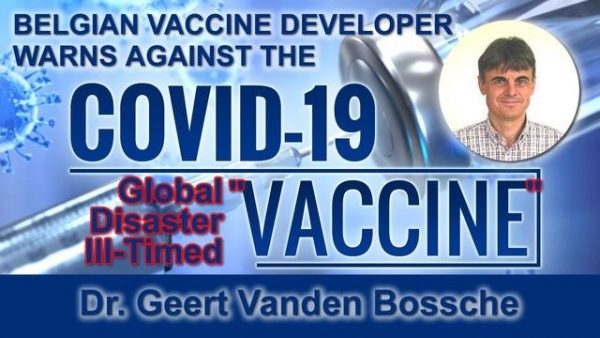 “Doctors are warning us that we are about to experience a health catastrophe of unknown proportions. That the COVID vaccines will seriously backfire, decimating our natural human responses to viruses and other infections. That is the threat for the future that is measurable in terms of months. However, people are already dying and being seriously hurt within days or even hours of getting COVID vaccine shots.”

The article links to an urgent warning by top vaccine scientist Dr. Geert Vanden Bossche who works for two of Bill Gates’ foundations. Dr. Bossche says the COVID vaccine is an imminent threat to humanity because it targets us both by destroying our immune system and by weaponizing the virus. He says that’s why there are now more virulent strains coming from Brazil, the UK, and Africa.

“Dr. Geert Vanden Bossche is one of the top leading vaccine experts in the world and is seriously pro-vaccine. Yet he is urging WHO and world political leaders to immediately halt all ongoing Covid-19 mass vaccination campaigns as there is compelling evidence that they will soon dramatically worsen the consequences of the current pandemic….

“Dr. Bossche is crying out to the world that the present mass vaccination already in progress is becoming ‘the biggest and most tragic mistake made in the history of public health in general and in the field of immunization in particular.’ Immediate cancellation of all ongoing Covid-19 mass vaccination campaigns should become THE most acute health emergency of international concern. As we shall see below, more than several countries are suspending their vaccination programs. Irish health officials on Sunday became the latest to recommend the temporary suspension of the AstraZeneca vaccine after reports of serious blood clotting.”

Why Are US and UK Expecting Mass Deaths?

Dr. Mercola’s article links to the Variants video by WhatsHerFace. He says:

“WhatsHerFace questions why the U.K. government is procuring 6 million pounds’ worth of body bags, or ‘temporary body storage,’ even as government officials announce that the current vaccination rate has ‘created a protective wall’ against the infection. If that’s true, why are they expecting an ‘excess death scenario’? The procurement agreement will remain in effect for four years. Does the U.K. government know something they’re not sharing with the public?”

“The US Army just conducted a three-day exercise in collaboration with the New York City Police and Fire Department. The exercise simulated a nuclear and biological event on the NYC subway system and Yankee Stadium. Similar drills are scheduled for Philadelphia and Los Angeles in the coming months of September and October.”

CDC Director Rochelle Walensky just reversed policy reports that the “new data” shows the COVID injections don’t stop infection or prevent transmission. So, getting the shot doesn’t protect the people who get it or others. She says we should expect tens of thousands of breakthrough cases.

“The jab doesn’t protect or does it? CDC Director Walensky says the obvious — it doesn’t stop transmission by vaccinated. Now a professor with the Oxford Vaccine Group (AstraZeneca) says herd immunity is impossible. So why are we obsessing and forcing jabs?”

So, only the naturally infected provide herd immunity.

In Perspectives on the Pandemic | Professor Knut Wittkowski | Episode 2, epidemiologist Knut Wittkowski explained early last year that the best way to solve the COVID-19 crisis was with natural herd immunity – not with a lockdown or vaccines. He explained that nursing homes should be closed for about four weeks. He said COVID-19 is a flu like every other flu. If schools and business had remained open, we would have gotten herd immunity last year. Professor Wittkowski said if the government had not intervened, the epidemic would have been over early last year. He said we are experiencing horrific consequences now of bad policy.

Professor Wittkowski says Americans are too docile. If people don’t stand up for their rights, they will lose our freedoms forever. He says Americans should resist and should hold politicians responsible for their misguided policies – all for nothing.

Making The Unvaccinated Pay points out:

“For the unvaccinated, it’s feeling a bit lonely out there. With increased pressure coming from all corners to just get the jab, advocates are ratcheting up pressure to strip away additional liberties from those who choose not to get inoculated. This is a classic Communist tactic of dividing the people to distract them from what is really going on. We’ll look into this and offer some perspective and ways you can help in today’s episode of Analysis Behind the News where we provide the perspective and the plan to help restore American liberty and independence.”

The latest edition of The New American is called COVID Lies and is free online.

“Government and media have lied to us from pandemic day one. Are they lying about the vaccines, too? What is their goal?

Indeed, since March 2020 when the World Health Organization (WHO) declared a global pandemic, calling on all countries to ‘double down’ with ‘aggressive’ virus containment efforts, the official response to this nebulous advice has made matters far worse than the disease. From mask mandates to economic shutdowns, from quarantining healthy people to placing COVID patients in nursing homes, from ignoring proven remedies to mandating untested experimental vaccines, the reaction to COVID would be laughable if it were not so destructive.

Yet these are the same leaders who are now dangling the carrot of vaccines in exchange for your hostage liberties. Your cooperation is so important that President Joe Biden is sending government agents to your home to make sure you’re vaccinated. (Did thoughts just spring to mind of Nazi agents and their mass sterilization and ethnic-cleansing programs of the 1930s? As today, government then claimed it could rid society of disease, and public health was their excuse for stripping individual rights, too.)

Before rolling up your sleeve for the jab, it may be wise to take a closer look at the track record of COVID deceit, and to learn what Deep State perpetrators openly admit is their ultimate goal. Also of interest is what experts are saying about our disastrous course — experts whom bureaucrats and major media are desperately trying to suppress.”

The article discusses the problems with facemasks and lockdowns. It explains the importance of readily-available, inexpensive, proven treatments for COVID including hydroxychloroquine (HCQ), ivermectin, and budesonide which when given early help keep people out of hospitals and have allowed hundreds of thousands of Americans to recover quickly and easily.

The article includes this graphic about facemasks.

“The lies and deceit surrounding COVID-19 seem endless. As former Pfizer VP Yeadon wrote in a recent e-mail: ‘What almost every government told their people was an absurd set of statements, most of them easily disproven by reference to published literature & often simply by thinking’ (published at off-guardian.org). ‘We hear the imminent arrival of ‘vaccine passports,’ which don’t enhance public safety yet grant to the state totalitarian tyranny,’ he concluded. ‘There is no other interpretation that fits all the major facts, than that the goal is control through what will be the world’s first digital identity database.’

Does this mean we are destined for inevitable techno-enslavement? Not at all. The good news is that both the public and the medical community are waking up….Among them are the Association of American Physicians and Surgeons (AAPS), the Front Line COVID-19 Critical Care Alliance (FCCC), PANDA (Pandemics — Data & Analytics), BiRD (British Ivermectin Recommendation Development Group), and the Covid Medical Network.

Members of these groups have created home treatment guides and established telemedicine services nationwide. [Dr. Peter] McCullough credits the roughly 500 doctors who participate in these programs and says, ‘we crushed the epidemic curve in the United States.’ These organizations are also helping educate the public about COVID vaccines and support legal action to resist mandates. For example, McCullough is serving as lead expert in the bellwether case before the Texas Supreme Court against Houston Methodist Hospital, which recently lost 153 workers who refused vaccination as a condition of employment.

Another source of COVID legal assistance is America’s Frontline Doctors (AFLD), a group founded by physician and attorney Simone Gold. AFLD has filed injunctions to halt COVID vaccines in children, is helping college students whose schools are forcing vaccination on them. Additionally, the National Vaccine Information Center (NVIC) provides an Advocacy Portal to protect against vaccine mandates.” 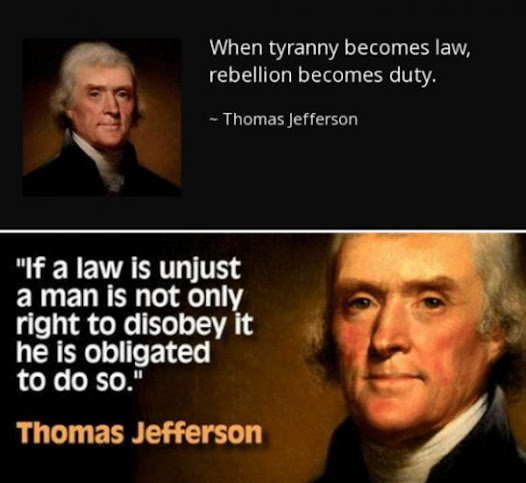 Read more at: NaturalBlaze.com and VaccineWars.com.