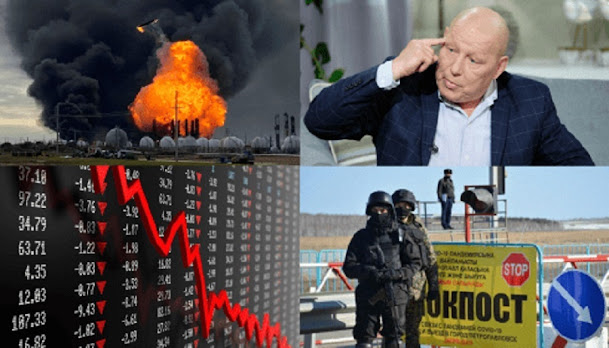 After the previous reel, in which Poland’s favorite clairvoyant Mr. Krzysztof Jackowski shared his vision of the internal political situation in Poland and talked about general things, he went on air again today to talk about the coming global changes and to answer subscribers’ questions.

Mr. gbkEmilgbk did a digest of the forecast.
In my vision a few months ago, I promised that in August we would face big inflation, shortages of goods and maybe even a stock market crash. And what are we seeing?
Prices of building materials have gone up a lot (Mr. Krzysztof recently bought a lot and is building a survival farm there, so he knows all the prices firsthand), prices of manufactured goods have gone up, food prices have gone up a little less, but still have gone up and are going up.  This inflation will not stop and no amount of political spells can stop it. But as every financier knows: rising prices and deficits are like the aftershocks before an earthquake called a stock market crash.  But when will it happen?
My impression is that we have to expect a sort of double economic collapse in the coming months.  First, something will trigger in August – there will either be some sharp but not critical collapse in the markets, or some product will jump in price. And that will turn on general inflation, which will start to rise at a crazy rate. And somewhere in the fall, the market will collapse.
I also have the impression that there will be two terrible accidents in the world – the first one will be strong, the second one will be very, very strong. And it will be something to do with the world economy, not just some explosions at some plant. These accidents will trigger market processes, a collapse and the subsequent inflation.
I don’t see that these accidents will happen in Poland, but Poland, like everyone else, will suffer. So I advise everyone to take some steps in private savings so as not to lose out on a stock market crash or a drop in the value of currencies. What to invest in? All currencies will fall, but I think you have to pay attention to the dollar, pound or euro – all other currencies will just collapse.
People ask me about widespread popular revolt, hoping that the protest will change something somewhere. No, it won’t. There will be a growing epidemic, in fact – it has already begun, so governments will now impose more and more restrictions. The lockdown that we had in 2020 will seem like child’s play compared to what’s coming.
I see cities in Europe where people will not be able to leave their neighborhoods – there will be fences and roadblocks in the streets. It may happen that some people who have not complied with the rules will at times feel humiliated – and things will look much more serious than before. There will be dark months when we realize very quickly that we live in a different world. I’ll be honest – I dread the coming of autumn, but I dread the winter even more when the plague and repression will reach its new peak.
If anyone thinks that one day everything will be all right, that sooner or later there will come a day when everything will be as it was before – I want to tell these people right away: you are wrong! Things will never be the same as before, the drama of the situation will be increasing with each passing month, until it all ends in a global military conflict.