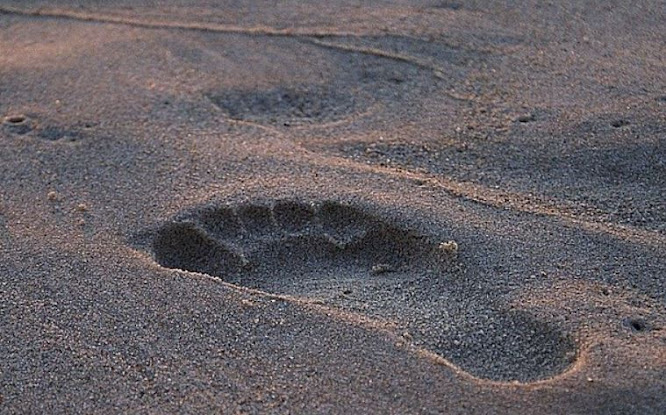 Of all the discoveries thought by evolutionists to support the idea of human evolution, one of the most sensational is the discovery in 1978 of a 75′ long trail of crisp footprints.

The prints were found in a layer of volcanic ash dated by conventional means to be 3.75 million years old, and assumed to have been made by a human ancestor. Since this date was that of the australopithecine “Lucy,” found in 1974, the discovery was important indeed.
The prints were discovered and defended by the recently deceased Mary Leakey (died December 9, 1996, at the age of 83), Matriarch of the famous fossil hunting Leakey family, whose finds were extensively publicized and funded by National Geographic Magazine.
Mary Leakey was a tireless worker, whose careful research stands as some of the least controversial in a vicious, ego-laden, funding-driven, field of “one-upmanship.”
As far as the footprints go, her data are not questioned, but the interpretation of the data illustrates the lengths to which evolutionists will go to avoid questioning man’s supposedly evolutionary ancestry.
The prints themselves are quite human-like “indistinguishable from those of modem humans” (Anderson, New Scientist 98:373, 1983). 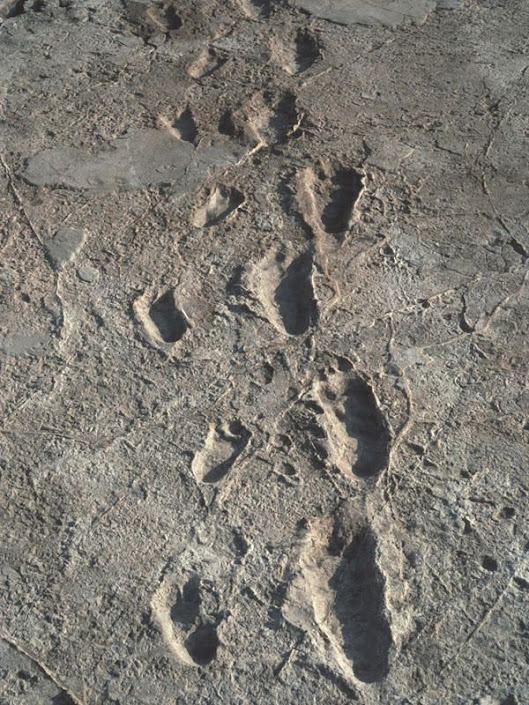 Human Footprints 3.6 Million BC
Following extensive research it was concluded that the footprints “resemble those of habitually unshod modem humans…. (If the) footprints were not known to be so old, we would readily conclude that they were made by a member of our genus” (Tuttle, Natural History March 1990).
Because of the dates, the prints have been assigned to Australopithecus afarensis, i.e., Lucy’s kind. But is this valid? Lucy was essentially a chimp. Even discoverer Donald Johansson only claims that Lucy was a chimp that walked somewhat more erect than other chimps.
The Australopithecus foot was an ape’s foot, with an opposing thumb, and long curved toes just right for climbing in trees, but most unlike a human’s foot. According to researcher Dr. Charles Oxnard in a 1996 interview:
“If you examine (Australopithecus foot bones) more closely, and especially if you examine it using the computer multivariate statistical analyses that allows you to assess parts that the eye doesn’t easily see, it turns out that big toe was divergent.”
Why do evolutionists continue to maintain that the chimp-like Lucy made the Laetoli human-like footprints, and that both represent our ancestors? Well, it’s certainly not for scientific reasons. The drive to prove man’s animal ancestry is great, for it frees one from accountability to a creator-God.
Thus we see that it is the creationists, not the evolutionists who are the empirical scientists. A human footprint must be made by a human foot!
My evolutionary colleagues could take a cue from Mary Leakey. While a thorough-going evolutionist herself, believing fully in man’s descent from the apes, she had a more cautious approach to the scientific data and especially speculative theory. In an Associated Press interview three months before her death, she “agreed it was impossible for scientists ever to pinpoint exactly when prehistoric man became fully human.
“We shall probably never know where humans began and where hominids left off” she said. Since scientists can never prove a particular scenario of human evolution, Leakey said ‘all these trees of life with their branches of our ancestors, that’s a lot of nonsense.’”
By John D. Morris, Ph.D., President of Institute for Creation Research