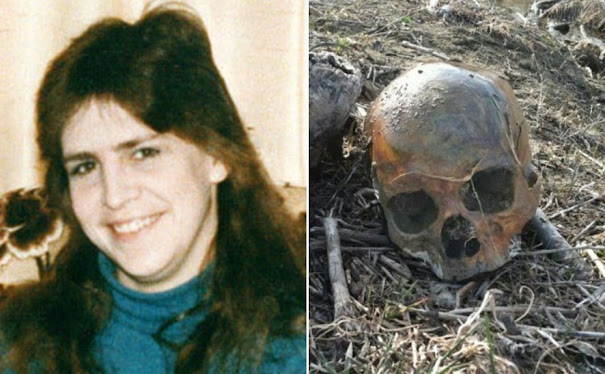 Despite her death occurring five years prior, the story of the homicide of Linda Sue Sherman always begins on June 28, 1990. It’s on this date two flight attendants having lunch in a restaurant in the northern suburbs of St. Louis, Missouri noticed a human skull in the bushes outside their window.

It was positioned in such a way that it appeared to be staring directly at them.
Police were quickly summoned to the scene. The skull was yellowed and encrusted with dirt – indicative of being buried for quite some time.
Recalling a botched cemetery relocation project happening nearby and having no recent missing person cases to tie the remains to, investigators surmised the skull was not indicative of foul play. It was placed in evidence storage, becoming a curiosity pending further information. 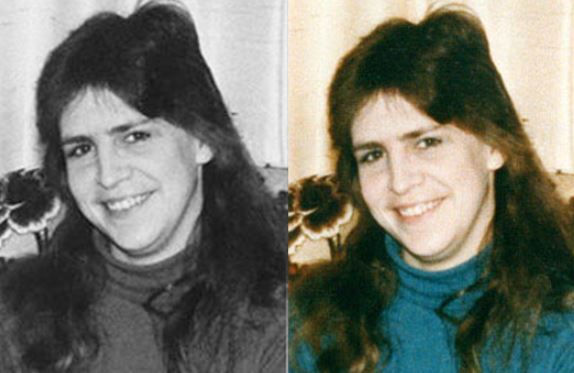 Nearly 15 months later – on September 16 1991 – further information finally arrived. A letter sent to the neighboring Vinita Park police department, written in stamped purple ink, alerted them to the following:
“THE BRIDGETON POLICE HAVE LINDA SHERMAN’S SKULL”
Vinita Park investigators were familiar with the name. Linda Sherman was a married 27-year-old mother and resident of the small town who vanished on April 22 1985.
Initially skeptical of the letter, investigators quickly got in touch with the nearby Bridgeton police and confirmed there was indeed an unidentified human skull in their possession. A comparison between Linda Sherman’s dental records and the remains were arranged, and a positive match was made the following day. 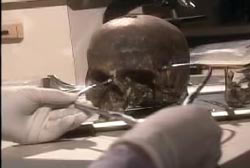 Many questions had to be answered…
1) Why would someone take Linda’s skull and place it in plain view of the Casa Gallardo restaurant? Someone would have had to of gone to where Linda’s remains were buried and unearth them just to take the skull.
2) Why would someone write a letter informing the police that the skull was Linda’s?
Employed by the U.S. Government Records Center located in Spanish Lake, Missouri (now the National Personnel Records Center) Linda Sherman was by all accounts a reliable worker and devoted parent.
Her sudden disappearance reeked of foul play to police long before the startling appearance of her skull five years later.
These suspicions were amplified once police zeroed in on Linda’s husband, Donald Eugene Sherman, and began to piece together the true nature of the couple’s relationship in the months and years leading to Linda’s disappearance.
The couple met and married while still in high school after Linda became pregnant with their only daughter. Throughout the ten years they were together prior to her disappearance, Linda made several attempts to leave Don, citing his jealousy and anger issues.
They would breakup and makeup many times, culminating in Linda filing for divorce for the second time on April 11 1985, just 11 days before she went missing. 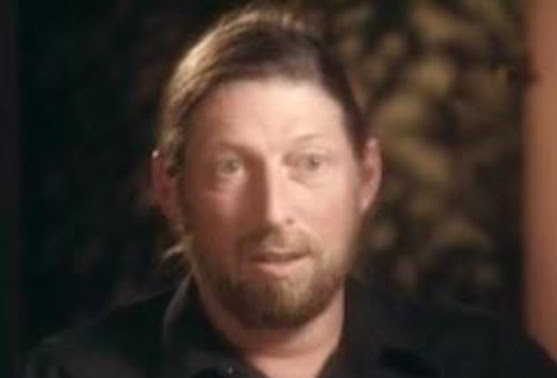 Don
In the days following Linda’s disappearance, Don proposed more than one theory to police. The one he would ultimately stick to involved Linda leaving him for another man, but he also suggested the possibility that Linda had gotten involved in a cocaine trafficking ring and was killed by co-conspirators fearful she would testify against them.
Don later told police he caught a glimpse of his wife in the passenger seat of a truck after her disappearance, with a man he didn’t know, but claims she ducked and he lost the vehicle in traffic.
None of these stories sat right with investigators, seeming more like the words of someone trying to deflect suspicion off himself.
Then there was the matter of Don’s family history. In 1974 his mother shot and killed his father in the kitchen over “one of their arguments.”
Initially denying she pulled the trigger, Don’s mother eventually pleaded guilty to manslaughter and served six months. It was a coincidence which only served to fuel the police focus on Don as the prime suspect in the disappearance of his wife Linda.
When Linda’s skull was found, the coincidences only got stranger. Not only was the restaurant where the remains were discovered a favorite drinking spot for Don Sherman, he was there the day his wife’s skull appeared.
The sudden disappearance of Linda Sherman, the equally sudden appearance of her skull five years later, and the anonymous letter devoid of fingerprints or DNA pointing police in the right direction – what does it add up to?
Despite never having enough evidence for a successful arrest or prosecution, the prevailing theory put forward by investigators ties up the loose ends rather well:
It’s the belief of investigators that Don murdered his wife sometime on or around April 21, 1985 in reaction to learning she planned to finally go through with a divorce. He buried the body and reported her missing. Ironically, he realized years later that without proof she died, he wouldn’t be able to file for divorce and remarry.
At this point, Don hatched a plan to dig up her skull and plant it somewhere it would be easily found. The scheme worked perfectly – except for the fact the police incorrectly surmised the skull originated from the nearby cemetery relocation project and didn’t bother with an analysis.
After months of waiting for news of the discovered skull being connected to his missing wife and hearing nothing, Don decided to take further action.
He wrote the letter and sent it to police, at which point the connection between the discovered skull and Linda was finally made. She was declared dead, and Don was allowed to remarry.
It’s a compelling theory, but lacks any concrete evidence. More than three decades after her death, the homicide of Linda Sherman is unlikely to be solved without the discovery of the rest of her remains. Even then, the weight of time may be too much to overcome in the pursuit of justice for Linda.
By Taylor Leonard, source: theghostdiaries.com