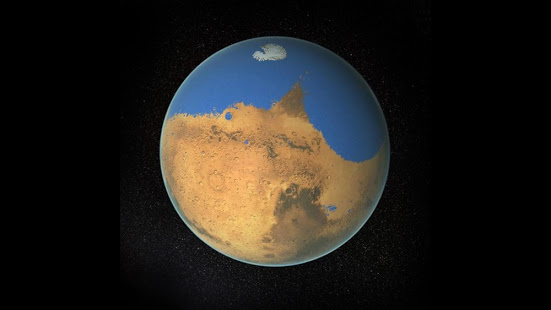 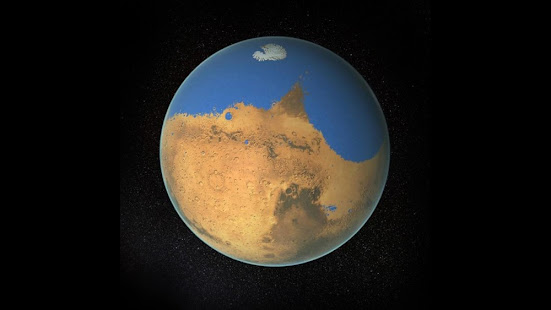 (Planet Today) The sand dunes of Mars looked blue in a stunning photo that the National Aeronautics and Space Administration (NASA) shared on April 8. Captured using a special infrared camera onboard NASA’s Mars Odyssey orbiter, the breathtaking image covered an area of 19 miles somewhere on the Martian north pole.

In the image, a sea of windswept sand dunes could be seen stretched out across the Martian surface. But instead of looking at the Red Planet’s trademark orange color, the dunes were tinged with a mix of gold and blue. As it turned out, the thermal image was digitally colored to highlight the wide-ranging temperatures there. Areas tinted in blue represent colder regions while warmer areas were tinted in orange and yellow, NASA said in a statement.

The intricate scene comprised only a small fraction of the entire Martian north pole, which covers an area as wide as Texas, according to NASA. The colorful photo was a composite of several shots taken between December 2002 and November 2004. NASA shared it to celebrate the 20th anniversary of Odyssey in space, which left Earth on April 7, 2001. The probe continues to operate to this day and is the longest-working Mars spacecraft in history.

Among its many accomplishments, Odyssey transmitted more than a million thermal images of Mars back to Earth during its two-decade flight, according to NASA. Data from the orbiter also allowed the space agency to pick the ideal location for landing the Perseverance rover, which reached Mars last February after less than seven months of trekking space.

As on Earth, the Martian poles are the coldest regions on the Red Planet, with temperatures dropping to minus 220 degrees in winter, according to the National Weather Service. Both the north and south poles are covered with permanent caps made of water ice and dry ice (solid carbon dioxide).

Scientists initially believe that the south pole cap consists only of dry ice. But data from the European Space Agency‘s (ESA) Mars Express, which entered orbit around the planet in 2003, shows that hundreds of square miles of permafrost surround the south pole. Permafrost is water ice mixed into the soil and frozen solid. This is why past observations have failed to detect water ice – the soil does not reflect light easily.

The Martian poles are some of the most visually stunning and mysterious regions on the planet. Satellite images of the south pole frequently feature large spider-like patterns that can extend several thousands of feet. These patterns have baffled scientists since they were discovered two decades ago. Only recently have researchers confirmed that these patterns crop up whenever dry ice gets heated and form cracks.

Last December, a gigantic angelic figure complete with a pair of wings and a halo was spotted at the south pole. The spectacular figure was captured by Mars Express just in time for last year’s Christmas season. It appeared in dark, brooding red – in stark contrast to the light, tan color of the sand around it. According to the ESA, the dark hue was due to the composition of the sand dunes, which are made of minerals also found on Earth, such as pyroxene and olivine.

The south pole’s nether regions are equally fascinating. Last September, an explosive study suggested that four hypersaline lakes might be hiding below the south pole. The biggest of those lakes, which scientists previously claimed to exist, measured around 12 by 18 miles. The rest were much smaller, with dimensions of about six by six miles. Researchers suggested that if the lakes were remnants of the water that was once on the surface, then they might be ideal locations for scouting signs of alien life, both living or dead.