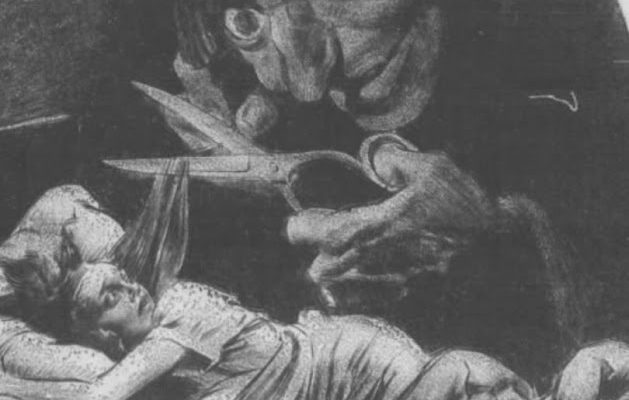 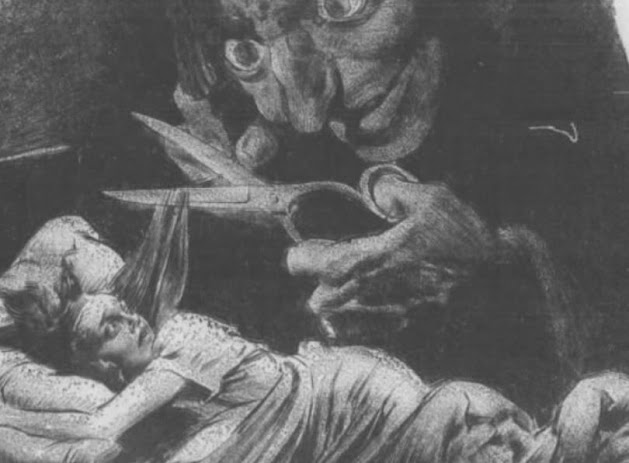 History is peppered with strange accounts of phantom attackers. These mystery assailants attack, stir up a massive panic, and then disappear as mysteriously as they come.

Many, like the legendary Spring-Heeled Jack, are clearly more fiction than fact, but now and then an outbreak of strange behavior is rooted in genuine criminal activity. The panic surrounding the London Monster, for example, likely grew out of legitimate attacks on women in 18th century London streets.
A phantom attacker similar to the London Monster stalked the streets of Pascagoula, Mississippi during World War II, preying on women and girls. His particular perversion involved cutting hair, leading locals to dub him The Phantom Barber of Pascagoula.

The year was 1942. America was at war. As her men and boys went off to fight in foreign fields, her towns geared themselves up to produce the material the troops would need to win the war. The small town of Pascagoula was no exception.
Indeed, the war was a boom time for the town–its population increased by 15,000 in just two years. Pascagoula was involved in the manufacture of war ships, a crucial industry for a nation involved in a war on two oceans.
However, the influx of so many people into what was once such a small town lead to tensions. It was the perfect recipe for a panic, what with the social upheaval and the specter of warfare hanging overhead. Soon enough, there was indeed a panic, one that seems similar in many ways to the Mad Gasser of Mattoon episode, which has become a textbook case of mass hysteria.
The attacks began in early June 1942, when the Phantom Barber cut the hair of Mary Evelyn Briggs and Edna Marie Hydel in their bedroom at the convent of Our Lady of Victories. By the end of that week, three people received unwanted hair cuts at the shears of the Phantom Barber. None saw their attacker. 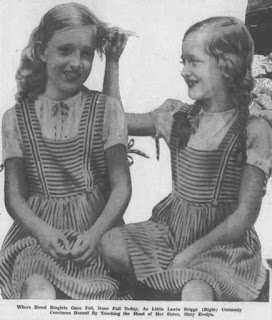 Mary Evelyn Briggs and her sister Laura
The town was understandably in a panic. It got to the point where the Army even modified its blackout regulations (blackouts were procedures to defend against air raids) in order to help police hunt the Barber. The Phantom Barber primarily struck on Monday and Friday evenings, and entered through a slit in window screens.

A week after the first attack, the Phantom Barber struck the home of David G. Peattie, shearing his daughter Carol’s hair. The parents found a bare footprint near the window.
The following Friday, the attacks became violent: the Phantom allegedly entered the house of Mr. and Mrs. ST Heidelberg, and proceeded to beat them with an iron bar. The final attack happened on a Sunday, two weeks later.
The Phantom clipped a two inch lock of hair from the head of Mrs. RR Taylor. Mrs. Taylor reported a sickening smell and something being pressed to her face, which authorities assumed to be a chloroform rag. All told, about ten homes were broken into during the Phantom Barber’s reign of terror.
In August, the police apprehended a suspect that they concluded was the Phantom Barber. His name was William Dolan, a 57-year-old German chemist with reported German sympathies and a grudge against the Heidelbergs. 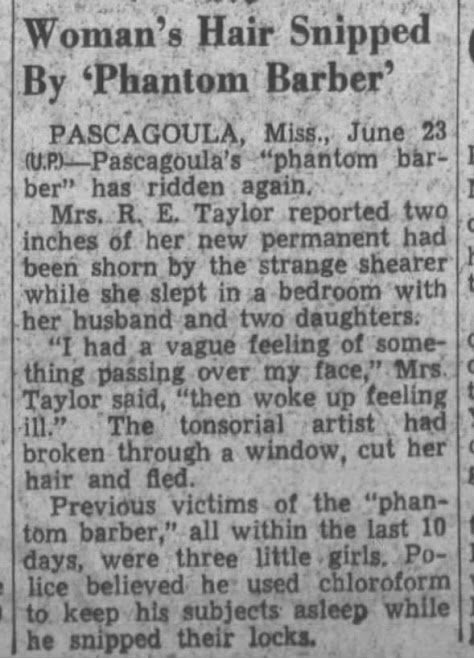 Mr. Heidelberg’s father was a local judge who had refused to lower Dolan’s bail on a trespassing charge several months before. Dolan was charged with the attempted murder of the Heidelbergs, but curiously he was never charged with one of the Phantom Barber attacks, despite the FBI finding a bundle of human hair behind his house, some of which belonged to Carol Peattrie, who you will remember was the Barber’s fourth victim. Dolan denied being the Phantom Barber.
He received ten years for the attempted murder charge. After his arrest, the Phantom Barber attacks ceased.
It isn’t clear whether Dolan really was the Barber though. His attack was uncharacteristically violent compared to the Barber’s attacks.
It could be argued that the Barber attacks were practice runs leading up to the assault on the Heidelberg’s, but if that were the case, why do another Barber-style attack after the Heidelberg assault? Also, if they were practice runs, why cut hair? It sounds like something sexually motivated, a hair fetish perhaps.
If that were the case and Dolan were the assailant, why keep his prizes in the back yard? Also, it doesn’t seem that the footprint in Carol Peattrie’s room was ever analyzed, a definite oversight on the part of the police.
As it often happens, there are no definitive answers in this case. It is certainly possible that a pervert with a hair fetish was stalking the streets of Pascagoula.
Whether that pervert was William Dolan, or another man who decided to book it out of town once authorities snapped up Dolan and his name was linked to the attacks, remains unknown. The identity of the Phantom Barber of Pascagoula will remain a mystery.
Source: Pajimans, Theo. “The Phantom Barber of Pascagoula.” ForteanTimes.com. November 2009. Fortean Times. March 17, 2014