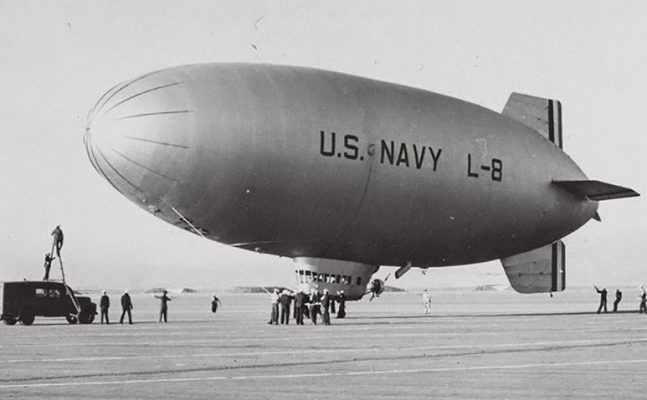 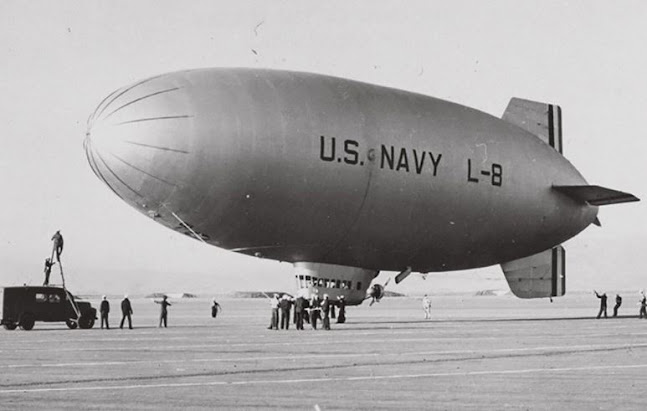 Ghost ships have been a facet of history since humans first began to explore the world’s vast oceans. Vehicles lost under mysterious circumstances, ghost ships evoke a sense of mystery and loss.

One such lonely vessel haunted the Arctic for decades, before being lost to the endlessly churning icebergs. There are hundreds of similar stories, ships and crews lost to the enigmatic waters.
But ships are not the only vehicles that can become ghosts. One of the strangest stories of ghostly vehicles comes out of World War II.
Blimps were used for a variety of purposes during the war, from reconnaissance to anti-submarine patrols to protection from dive bombers. They were useful because they could hover in place for long time periods and could also fly for long distances without needing to refuel.
In 1942, one such blimp, an L-8, went on a patrol off the California coast, never to return. What happened to the blimp, and her crew, remains an enduring mystery to this day.

The morning of Sunday, August 16, 1942 was a foggy one. When the Navy blimp was set to take off from Treasure Island, her crew was reduced from three to two, owing to the increased weight caused by the mist that had settled on the skin of the balloon.
So, Lt. Ernest DeWitt Cody, the pilot, and Ensign Charles E. Adams took off that day, while Aviation Machinist’s Mate Third Class James Riley Hill remained on the ground. The decision would save Hill’s life. 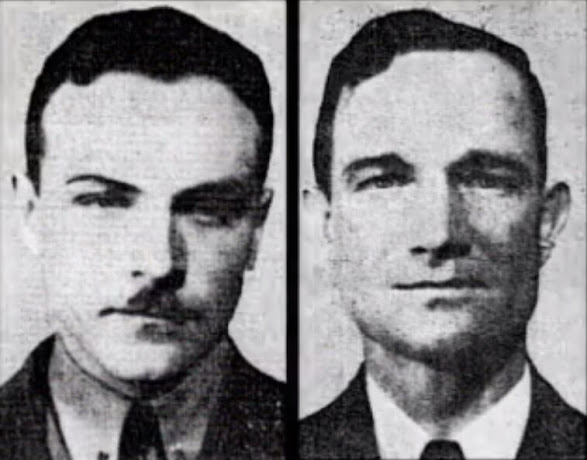 Ernest Cody and Charles Adams
When the L-8 took off on its anti-submarine patrol, everything seemed normal. An hour and a half into the flight, Lt. Cody radioed back to base saying that they had seen a possible oil slick that warranted investigation. No further communications were heard from the doomed blimp.
At 11:15, witnesses saw the blimp floating in from the ocean, near San Francisco. The blimp drifted further to Daly City, where it was losing altitude.
It hit a bluff, and dropped a depth charge on a golf course. It hit roofs and a car before settling down on Bellevue Avenue. When rescuers rushed to assist the stricken crew, they found the cabin empty.

Investigators found that the life raft and parachutes were still in the cabin. The life jackets were missing. For some unknown reason, the pilot had set the motor to idle, and propped open the door.
The radio still worked, so there was a mystery as to why, if something went wrong, the pair didn’t call for help. Some believed that they were captured by an enemy submarine.
Others believed the crew got into some sort of fight and fell out of blimp. Still another story was that one member of the crew fell and accidentally pulled his would be rescuer down into the ocean. 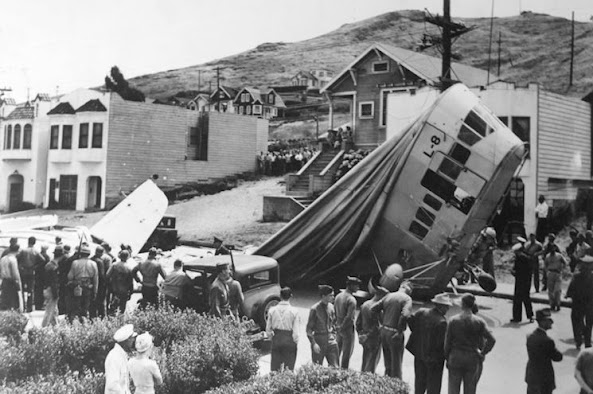 The blimp finally came to rest atop Richard Johnston’s freshly waxed car in Daly City, Calif., just south of San Francisco. (National Archives)
Some have suggested that the two men were killed by a stowaway or abducted by a UFO or that they simply — somehow — fell out of the blimp.
There have even been “sightings,” including one by the mother of Lt. Cody, who claimed to have seen her son in Phoenix a year later with his eyes looking “peculiar, as though he were suffering from shock or a mental illness.”
But all these “suggestions” have remained just that — unproven suggestions.
In the end, despite the best efforts of navy and private investigators who have been examining the incident for the last 75 years, our knowledge of what happened to Cody and Adams remains the same as it was in 1942 when a navy spokesman admitted “Nothing the navy knows now has given a satisfactory explanation of what happened.”
After the war, it was returned to Goodyear, where it was put into storage before eventually being rebuilt in 1968 as one of the famous Goodyear Blimps, where it flew over Houston, Texas until it was retired in 1982.
The fate of the L-8’s crew remains a mystery, and probably always will.
Sources: Levy, Joan, “Daly City’s ‘Ghost Blimp’ remains mystery.” Archives.smdailyjournal.com. December 19, 2005. The Daily Journal. January 17, 2016; Price, Mark J. “’Ghost’ blimp mystery lingers.” Chron.com. August 18, 2002. The Chronicle. January 17, 2016