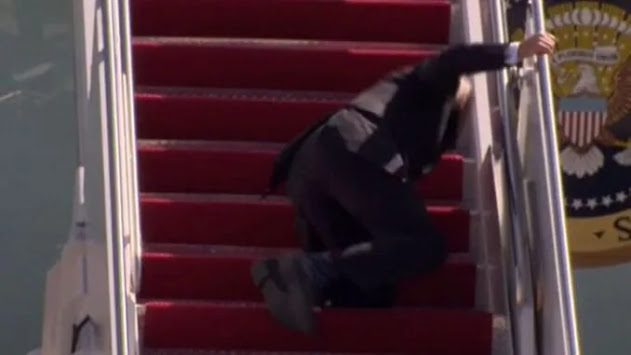 President Biden stumbled and fell several times while walking up the steps to board Air Force One on Friday.

Video shows Biden stumbling about halfway up the stairs. He managed to regained his footing and stumbled again, then while attempting to regain his balance, fell a third time.

The NY Post reports: White House deputy press secretary Karine Jean-Pierre told reporters aboard the presidential aircraft that she also was nearly toppled by the wind.

According to the National Weather Service, Joint Base Andrews in Maryland is experiencing winds of more than 20 miles per hour with gusts up to 25 mph.

However, the wind did not prevent the plane from taking off for a trip to Atlanta, where Biden will meet with community leaders about a shooting spree that killed eight at area massage parlors. He also will visit the headquarters of the Centers for Disease Control and Prevention to discuss the COVID-19 pandemic.

The White House hastily downplayed the significance of Biden falling.

White House communications director Kate Bedingfield tweeted, “I know folks have seen that President Biden slipped on his way up the stairs to AF1, but I’m happy to report that he is just fine and did not even require any attention from the medical team who travels with him. Nothing more than a misstep on the stairs.”