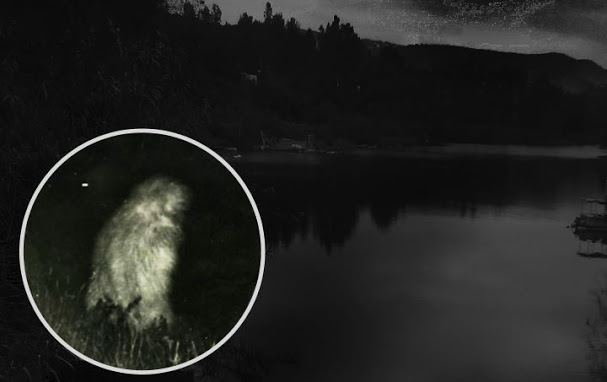 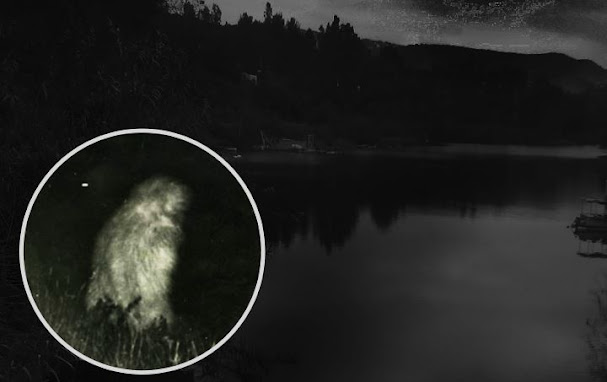 In the summer of 1969 numerous sightings of half-man, half-goat creature also known as the Lake Worth Monster reported on Lake Worth, on the northwest edge of Fort Worth, Texas.

It also produced one of the very few photographs ever taken of such an alleged beast. Early on the morning of July 10, John Reichart, his wife, and two other couples showed up at a Fort Worth police station.

They were so manifestly terrified that, as improbable as their story sounded, the officers had no trouble believing the six had seen something truly out of the ordinary.

As the witnesses’ story went, they had been parked along Lake Worth around midnight when a huge creature leaped out of a tree and landed on the Reicharts’ car. It was, they said, covered with both scales and fur and looked like a cross between a man and a goat.

Four police units rushed to the scene but found nothing. They were impressed, however, by the eighteen-inch scratch running along the side of the witnesses’ car.

Swearing that it had not been there before, the Reicharts were sure it was a mark from the monster’s claws. 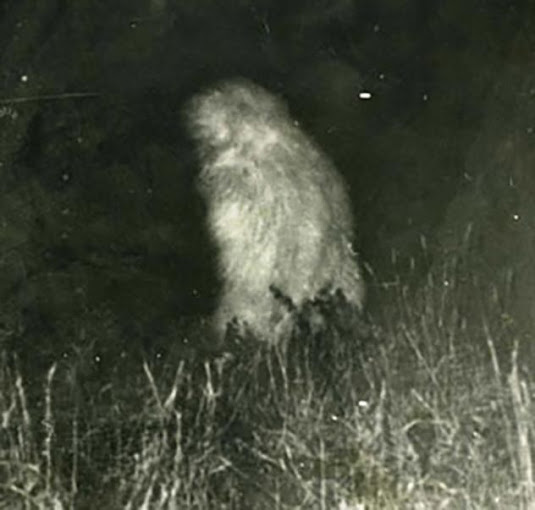 In the previous two months other reports of a monster had come to police attention, but were attributed to pranks. The officers assumed that the Reicharts and their friends had been similarly victimized, but the frightening, aggressive nature of this latest incident made them take the matter more seriously than heretofore.

Almost exactly twenty-four hours after this encounter, Jack Harris, driving on the only road going into the Lake Worth Nature Center, said he spotted the creature crossing in front of him.

It ran up and down a bluff and soon was being watched by thirty to forty persons who had come to the area hoping to see it after the Fort Worth Star Telegram headlined a story titled “Fishy Man-goat Terrifies Couples Parked at Lake Worth.”

Within a short time officers from the sheriff’s department were on the scene as well, observing the incredible sight. But when it appeared that some of the onlookers were going to approach it, the creature fired a spare tire, complete with rim, at them, and the witnesses jumped back into their cars. It then escaped into the underbrush.

The witnesses said it was seven feet tall, with an estimated weight of 300 pounds. It walked on two feet and had whitish-gray hair. The creature had a “pitiful cry — like something was hurting him,” Harris told a reporter. “But it sure didn’t sound human.”

In the weeks ahead parties of searchers, many carrying guns, made nightly forays into the woods and fields along the lake. Most thought it resembled a “big white ape.” 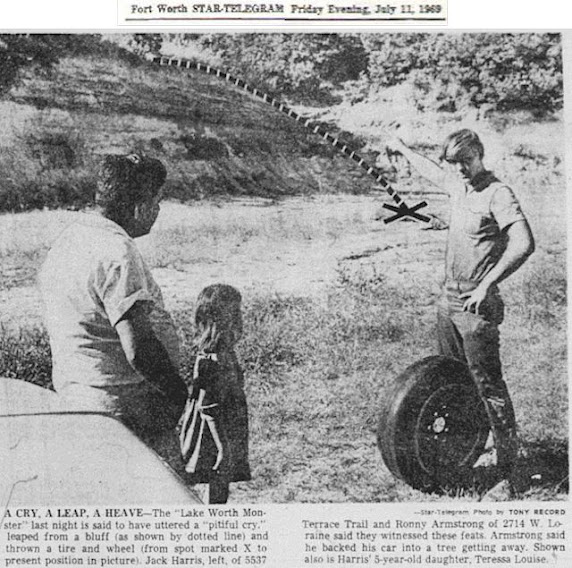 It left tracks, unfortunately not preserved, that reportedly were sixteen inches long and eight inches wide at the toes. On one occasion searchers fired on it and followed a trail of blood and tracks to the edge of the water.

Three men claimed that one night the creature leaped on their car and got off only after the vehicle collided with a tree. Another three individuals spent a week tracking it without ever seeing it, though they heard its cry and smelled the foul odor associated with it. They also came upon dead sheep with broken necks — victims, they believed, of the creature.

In October of 1969, a man named Allen Plaster, owner of a dress shop took a picture of the Lake Worth Monster, which is the only photographic evidence of the creature. The picture shows a large, white body. The image was then given to Sallie Ann Clarke.

Sporadic sightings would be logged for years afterwards, but the last report of the 1969 scare is attributed to Charles Buchanan. Buchanan said he had been dozing inside his sleeping bag in the back of his pickup when suddenly something lifted him up.

It was the monster. Buchanan grabbed a bag with chicken in it; the creature stuffed it into its mouth, then plunged into the lake and swam to Greer Island. This event allegedly occurred on November 7.