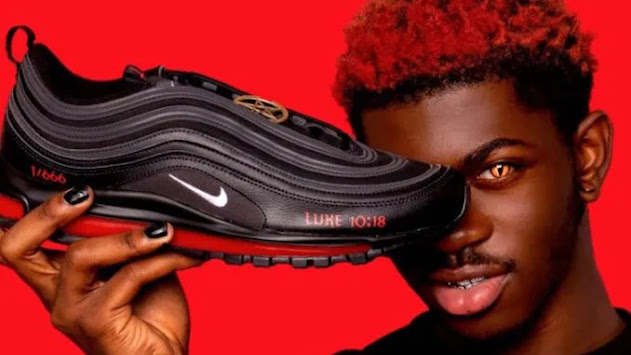 The “Satan Shoes” also contain the numbers 666 and come in a limited edition of 666 pairs.

Nike say they expect to ship the Satanic shoes on Monday, March 29. They contain “60cc ink and 1 drop of human blood.”

Breitbart.com reports: In selling the sneakers, the rapper has partnered with MSCHF — a company that runs on “structured chaos,” and has been “creating some of the most absurd, cynical, and viral projects and products that have spread across the internet,” according to a report last year by Business Insider.

Moreover, the release of the satanic sneakers will arrive on the heels of Lil Nas X’s latest music video, “Montero (Call Me By Your Name),” in which the rapper can be seen dancing on a stripper pole while descending to hell, where he subsequently gives Satan a lap dance. The title video, “Montero,” is a reference to the rapper’s real name, which is Montero Lamar Hill.

On the day the music video was released, Lil Nas X tweeted a message to “14 year old Montero,” informing his past self that he has written “a song with our name in it.”

“But this will open doors for many other queer people to simply exist,” Lil Nas X continued. “You see this is very scary for me, people will be angry, they will say I’m pushing an agenda. But the truth is, I am. The agenda to make people stay the fuck out of other people’s lives and stop dictating who they should be. Sending you love from the future.”

Late last year, the rapper make headlines when he told one of his pregnant fans to “get rid of it” during an online Q&A with his 6.3 million Instagram followers.