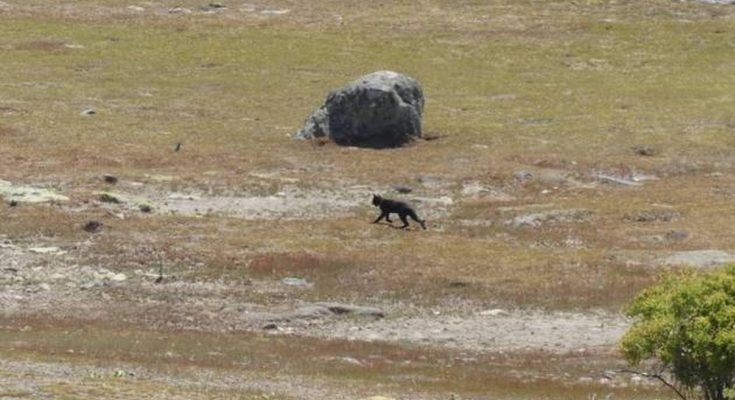 Throughout the last century people from the South Island of New Zealand and tourists have claimed to have spotted an extremely out of place creature roaming the countryside. Multiple photos show unusually large black cats stalking amongst the wild grass, but their existence has never been definitively proven.

Christchurch man David Whinwray has spoken of happening upon what he described as a tawny-gray cat just a few metres away from him in Christchurch. Whinwray initially thought the cat to be a type of mountain lion. He spoke to his father-in-law about what he had seen and the older man recalled an event from when he’d been working at the shipyards in nearby Lyttelton during the first World War. He recalled one day in 1915 when a ship from America was being unloaded. On board the ship was a cargo exotic of animals bound for Zoo’s in Australia. One of the cages containing the animals was accidentally opened, allowing a pregnant female puma to escape. It was last seen escaping towards the Port Hills.

Officials made little attempt to catch the cat believing that the puma would be unlikely to survive the freezing winter conditions for long. It is possible that the incident was keep quiet to prevent public panic about a wild puma on the loose.

Is it possible that this escaped puma is responsible for spawning generations of pumas that have remained elusive in the Canterbury Plains?

In the years since there have been the occasional sightings of startlingly large feral cats roaming the countryside, but these have mostly been written off as mistaken identity. There are however a number of encounters that suggest more than an overindulgent feral.

In July 1977 a woman in Kaiapoi saw a tiger by her front gate. She descrived a very large cat, bigger than a pig or dog, with light coloured fur, a long tail and no stripes. She worried no one would believe her but contacted police as she was concerned for the local children. Several days later large paw marks and animal droppings were discovered at nearby Pines Beach.

A local expert told media the prints were undoubtedly those of a large cat saying that the prints were larger than those of a lion. The very next day, a farmer in the area reported a large cat of similar size and description stalking his livestock. The police conducted another search but found no answers. They suspected that a big cat had got loose from either the zoo or the circus but had been recaptured before police found it.

Further sightings in the area over the subsequent years were usually written off as large feral cats. Hunters and farmers around the Ashburton River reported doing double-takes after seeing unusually large feral cats. Experts have demonstrated that well-fed wild cats can easily reach a weight of over 10 kiligrams.

One disturbing sighting came in 2007 from the Mount Somers area. A resident was tending her garden one evening when she heard an unusual sound. She looked over her fence and a large black cat in the adjoinging paddock dragging a lamb followed by a distressed ewe. The woman screamed, startling the cat and causing it to drop the lamb and flee into the bush. The lamb’s injuries were severe and it sadly passed away. The woman believed the cat to be a large, vicious feral rather than a puma but was surprised by its prowess.

The feral cat is elusive and aloof and can easily blend into its surroundings. Until a particularly large one is captured or a clear photograph taken, they are always going to be a bit of a mystery.