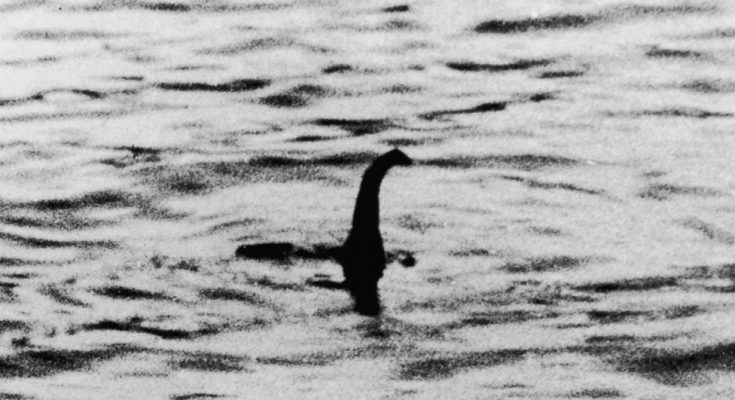 The Loch Ness monster, affectionately known as Nessie is a large marine animal believed by some people to inhabit Loch Ness in Scotland.

Since ancient times people have reported strange beasts inhabiting the Loch. Intriguingly stone carvings by the ancient Pict people depict a mysterious aquatic creature with flippers. According to a biography of St. Columba from 565 AD, the monster attacked a swimmer and was readying itself to attack another when the saint intervened, commanding the beast to “go back.” It obeyed, but continued to appear to the locals over the centuries.

The Loch Ness Monster’s notoriety began to grow in 1933 when a road adjacent to the Loch was completed, offering unobstructed views of the water. In April a couple saw a huge dragon-like animal cross the road in front of their car and disappear into the water. Numerous sightings were reported following this incident.

Nessie gained international recognition due to Robert Kenneth Wilson’s photograph of the alleged creature. The photo depicted a reptile like creature with a long neck emerging from the water. This photo is generally assumed to be a hoax. Some speculated that Nessie was a dinosaur thought to have gone extinct some 65.5 million years ago but somehow a small group survived in the isolated Loch.

In spite of the stereotypical image of Nessie being a long necked reptile most sightings over the years are of a creature that looks completely different. Of the thousands of reported encounters with Nessie only about 20 percent mention a neck of any length let alone a huge prominent one. Very few reports mention Nessie being scaly or reptile like. No one identity can capture all of Nessie’s reported characteristics. She has been described in varying colours from pink to black, matte or glossy, with humps, manes and horns. She has been said to be able to travel at great speed or not be able to move at all.

These huge variations in description make it difficult to determine what exactly it is people are seeing and if there is even anything there at all. Many reports are just not detailed enough to allow investigators to narrow down what is lurking in the lake. Some have theorised that it is not a cryptid we should be looking for in the lake but perhaps some kind of spiritual entity that manipulates witnesses into seeing strange and unexpected visions in the lake. Perhaps there is natural gas or some other hallucinogen in the area which causes people to see things that aren’t there.

Skeptics argue that Nessie is more a quirk of human psychology than an actual living creature. They suggest the witnesses go to the lake expecting to see strange phenomena after hearing all of the stories and therefore subconsciously misattribute unfamiliar natural occurrences as being evidence of Nessie. With the huge amount of tourists flocking to Loch Ness each year if there is some unknown creature lurking beneath surely it won’t be long before photographic evidence is captured.