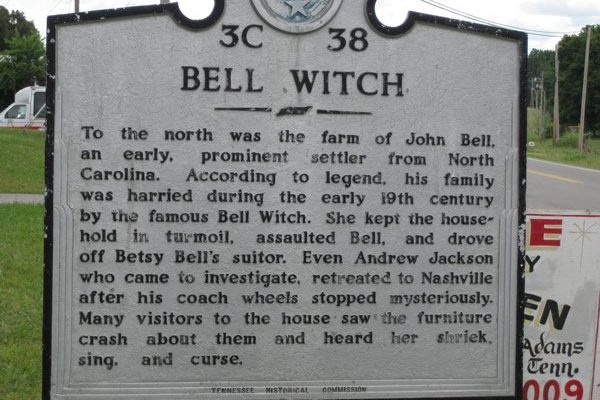 The story of the Bell Witch began over 200 years ago in Hopkinsville, Kentucky. in 1817 Pioneer John Bell Sr. and his family began hearing strange noises in their modest log cabin and on the grounds of their farm. Slowly the noises morphed into taunting words.

Then the words escalated to poltergeist phenomena and the spectral force dubbed the Bell Witch began attacking Betsy Bell, a child of about 11. The spirit pulled her hair, hit her and slapped her until she was bruised and marked. Three years later in 1820 John Bell Sr. passed away under strange circumstances. It is said the Bell Witch claimed responsibility for poisoning him and continued to torment his daughter Betsy until the following year.

Some locals dubbed the Bell Witch “Kate” in part because they thought that the Bell’s neighbor Kate Batts and her husband, Frederick were behind the incidents.

The week of January 20th 1890 saw hundreds of people descend upon a house east of Hopkinsville, Kentucky as word spread of lumps of coal and coal dust mysteriously falling from the ceiling in the family room. The house was occupied at this time by a Presbyterian minister and his family. It is reported that the minister’s wife was injured as a piece or coal struck her on the head and she required medical assistance. The frequency of the coal drops lessened by the weeks end. Locals drew connections from this incident to the stories of the Bell Witch from decades passed. The minister attributed the activity to a demonic presence and continually prayed for protection.

The Bell Witch became associated with the Bell Witch Cave located in Adams, Tennessee near to the former location of the Bell farm. The 150m long cave is privately owned with tours given in the summer months. Many people believe that when the Bell Witch abandoned the Bell family she fled to this cave and it became her new home. In one particular legend young Betsy Bell and friends had gone out one day to explore the cave. While inside one of the boys crawled into a crevice and became stuck. Suddenly a disembodied voice cried out, “I’ll get him out!” The boy felt hands grasping his feet and pulling him out of the hole. The Bell Witch is then said to have given the children a lecture on the dangers of spelunking without adult supervision.

In the many years since people in the area have reported hearing sinister disembodied voices, objects moving on their own and unexplained injuries. The area of Hopkinsville, Kentucky is known to be a hotbed of paranormal activity being connected to the Kelly, Hopkinsville Goblin sightings as well as paranormal statesman Edgar Cayce.