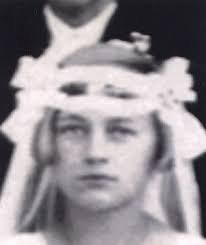 The story of Resurrection Mary is perhaps Chicago’s best known ghost story. According to legend the spirit resides in the Resurrection Cemetery in Justice, Illinois, just outside of Chicago.

From the 1930’s to the present day several people driving along Archer Avenue between the Resurrection Cemetery and the Willowbrook Ballroom have reported picking up a young female hitchhiker. The hitchhiker is described as a young woman dressed in a fairly formal and slightly old fashioned party dress, carrying a small clutch purse and shoes. She is said to be very shy and quiet. When the driver reaches the Resurrections Cemetery she is said to suddenly disappear from the vehicle. There have been several dozen reports of such incidents over the years.

The legend goes that Mary had spent the evening at the Oh Henry Ballroom attending a dance with her boyfriend. At some point during the evening an argument erupts between Mary and her boyfriend and Mary storms out.

She left the ballroom on foot and began walking up Archer Avenue. She had not gotten very far when she was hit by a vehicle and killed instantly. The driver didn’t stop and left Mary for dead. Her parents went looking for her when she failed to return home and found her lying in the grass on the side of the road. They were distraught at the sight of her dead body. A few days later a funeral was held and they buried her in Resurrection Cemetery. She was dressed for burial in a white party dress and matching dancing shoes. The driver that killed her was never identified.

In 1973, Resurrection Mary was said to have appeared at Harlow’s nightclub on Chicago’s southwest side. Later that same year, a taxi driver came into a bar across the street from Resurrection Cemetery, to ask about a young lady in a white party dress who had left his cab without paying her fare.

There have been several sightings in the 1970s and 1980s which involved cars hitting or having a near miss with a female pedestrian near Resurrection Cemetery. The woman however disappears by the time the driver exits the car.

Resurrection Mary is another example of the vanishing hitchhiker type of ghost story similar to the reports of ghosts from the Japanese Tsunami. These stories commonly report a hitchhiker entering a vehicle and mysteriously disappearing before they reach their destination. Sometimes they leave behind an item of clothing or an address that leads the driver to find the hitchhikers family who tell them that the hitchhiker died many years ago. There are so many of these stories reported throughout the world that they must have some basis in reality. Which ones are true accounts and which ones are just fun stories is difficult to determine.